The Panthers came from behind twice to defeat St George Illawarra Dragons 32-28 at Netstrata Jubilee Stadium on Friday.

In an enthralling, see-sawing affair, the Panthers trailed 28-18 with 15 minutes remaining, before scoring two late tries to snatch an unlikely win.

Stephen Crichton replicated his super-sub efforts from last week, as he came from the bench to score the match-winner, after a Viliame Kikau try brought the Panthers back to life.

The Panthers surrendered leads on either side of halftime, but held their nerve to continue their winning start to 2020.

Meanwhile, a sixteen-point haul by Nathan Cleary saw him surpass Preston Campbell as the fourth-highest scorer in Panthers history, capping off a commanding performance by the halfback.

Api Koroisau picked up from where he left off last week, as he ducked over for the opening try in the 9th minute. Cleary kicked the conversion to give the Panthers an early 6-0 lead.

The Panthers doubled their lead in the 15th minute, when Nathan Cleary spotted a gap in the goal-line defence and sliced through, before adding the conversion. The try took him to fourth on the Panthers all-time scorers chart.

The Panthers were in cruise control at 12-0, before a sudden shift in momentum saw the Dragons score three consecutive tries and snatch the lead.

As the Panthers looked set to score their third in the 22nd minute, Dragons fullback Matt Dufty took an intercept on his own line and went the distance to put his side back in the contest.

Then, Jordan Pereira broke away before finding Brayden Wiliame in support, who dashed away to make it 12-10.

The Dragons then took the lead in the 35th minute, as Zac Lomax strolled over after the Panthers gave away possession in their own half. Lomax’s conversion put the hosts ahead 16-12.

The Dragons appeared to have piled on a fourth try on the stroke of halftime, but it was ruled out due to a forward pass in a massive let-off for the Panthers.

The Dragons carried their momentum into the second half, dominating field position. But then, an early kick by Jarome Luai and Brent Naden’s desperate chase forced a drop out, and the Panthers took the opportunity to regain the lead.

Fittingly, it was Brent Naden who scored the try as he tracked down a deft grubber by Nathan Cleary. The halfback converted, nudging the Panthers ahead 18-16 after 53 minutes.

The lead was short-lived however, as the Dragons edged back in front when Dufty took the line on in the 60th minute. Lomax added the extras to make it 22-18 to the Dragons.

Penrith fell further behind when Corey Norman pounced on a clever kick by Ben Hunt, which extended the Dragons lead to 28-18.

It left the Panthers just 15 minutes to recover from a ten-point deficit, and they did just that.

The Panthers roared back to life in the 68th minute, as Josh Mansour desperately kept the football alive for Viliame Kikau to barge over. Nathan Cleary coolly slotted the conversion, narrowing it down to 28-24.

Soon after, Cleary unleashed super-sub Stephen Crichton, who found Liam Martin in support before getting it back to slide over and equalise. Cleary knocked the conversion over, pushing the Panthers ahead by two points with nine minutes to play.

Nathan Cleary added a penalty goal late on to give the Panthers a four-point buffer, which they bravely defended in the closing stages to make it back-to-back wins to start 2020. 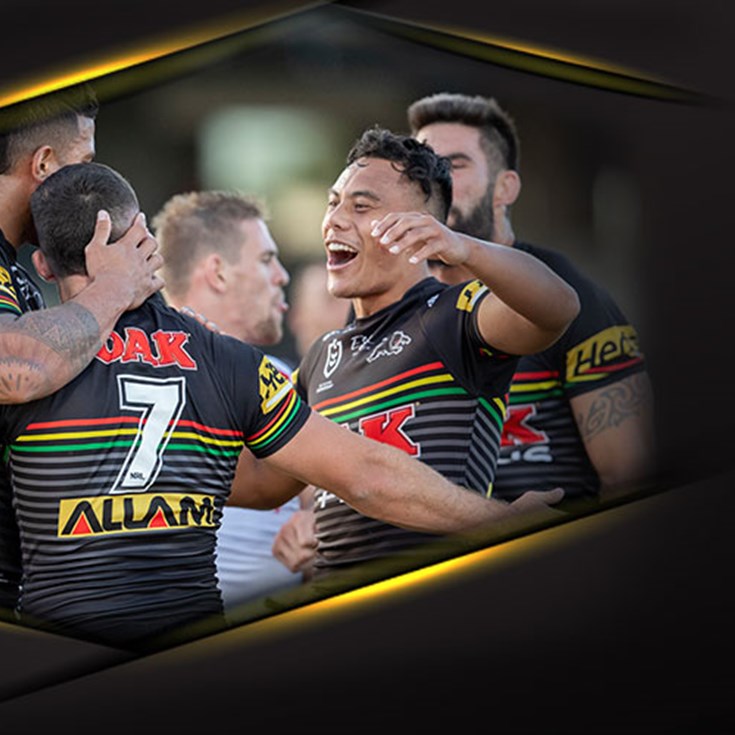