The Panthers claimed the 2018 Intrust Super Premiership NSW minor premiership with a comprehensive 38-10 victory over Western Suburbs at Panthers Stadium on Sunday.

Five-eighth Adam Keighran was a standout with a try, two assists and five goals, while Maika Sivo scored a hat-trick as the Panthers secured top spot in the ISP and extended their unbeaten run to nine matches.

The Panthers opened proceedings inside 2 minutes when Liam Martin charged 40 metres to score off of a Wayde Egan inside ball. Keighran's conversion handed the Panthers an early 6-0 lead.

However, an error from the kick-off allowed the Magpies to respond as Braden Robson flicked to winger Harrison O'Toole over the try line. Tyson Gamble's conversion attempt was waved away, and the Panthers remained in the lead after 5 minutes.

The Magpies then hit the front in the 13th minute when Kurt Aldridge pounced from dummy half, and Gamble's goal made it 10-6.

Egan rolled the football into the in-goal with Christian Crichton chasing through in the 18th minute, but the winger couldn't produce a clean grounding and the Magpies retained their lead.

After a Robbie Rochow knock on, Liam Coleman put the Panthers on the counter-attack with a line break. With the Magpies backpedalling, Maika Sivo busted through the defence to score, and Keighran's conversion edged the Panthers 12-10 ahead after 24 minutes.

However, the Panthers momentum came to a halt in the 30th minute when Egan was sent to the sin bin for repeated infringements.

The Magpies failed to capitalise on their one-man advantage, and the Panthers entered the sheds with their two-point lead intact.

The Magpies knocked on from the kick-off, and the Panthers took advantage of the opportunity as Sivo bulldozed his way over in the corner. Keighran's sideline conversion attempt was unsuccessful, and it remained 16-10 after 44 minutes.

Keighran came up with an impressive solo effort to widen the gap in the 46th minute, taking on the line and stepping through some weak defence to reach out and score. The five-eighth added the extras to extend the lead to 22-10.

The Magpies staged a dangerous backline shift with numbers to the right in the 52nd minute, but Sivo rushed out of the line and charged down the final pass to defuse the situation.

Off the back of a 40/20, the Magpies went on the attack and threatened to peg back the score before Billy Burns trapped a grubber and offloaded to Tyrone Phillips, who went the distance to score untouched. Keighran's goal widened the gap to 18 points after 59 minutes.

The Panthers continued piling on the points in the 61st minute when Keighran chipped towards the goal posts with teammates chasing through, and the bounce was perfect for halfback Liam Coleman to pounce. Keighran's fifth goal of the afternoon made it 34-10.

Keighran continued to terrorise the Magpies defence with his boot, kicking wide to an unmarked Sivo, who latched onto the ball and dived over for his hat-trick. The five-eighth couldn't convert from the sideline, and the score remained 38-10 after 68 minutes.

A bad afternoon for the Magpies hit a new low in the 71st minute when prop Cowen Epere was given his marching orders for mouthing off.

The Panthers stepped up in defence to deny the Magpies any consolation in the final 10 minutes to wrap up a 28-point victory that sealed the ISP Minor Premiership for the mountain men. 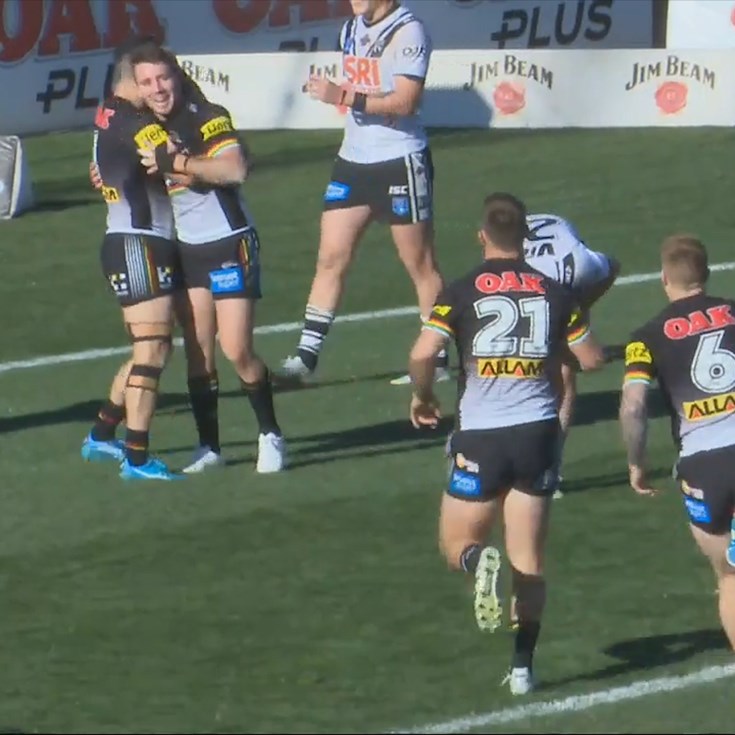