The Panthers claimed another major scalp as they defeated South Sydney Rabbitohs 20-12 at Jubilee Stadium on Thursday.

The Panthers prevailed in a tense battle to remain undefeated against last year’s top 4 sides. It came thanks to tries by Brent Naden, Stephen Crichton, Dylan Edwards and Nathan Cleary.

The win sees Panthers provisionally move into first place on the NRL ladder.

Brent Naden was called upon to replace an injured Josh Mansour on the left wing, and celebrated his return to the side with the opening try.

Naden dives over to open the scoring

A cross-field kick by Nathan Cleary was caught by Viliame Kikau and offloaded to Jarome Luai, who shifted it for Naden to slide over.

Cleary’s conversion attempt struck the upright, and it remained 4-0 to the Panthers after 8 minutes.

South Sydney did well to contain the Panthers for most of the first half, but the pressure eventually took its toll.

The Panthers turned to their left edge for a second try in the 27th minute, as Jarome Luai rolled it to the in-goal for Stephen Crichton to race through and plant it down.

Cleary was again unable to add the extras, as the Panthers led 8-0.

While Cleary was having an off night with the boot, his in-play kicking was great, as he put the Rabbitohs’ back three under all sorts of pressure.

The Rabbitohs had a number of try-scoring opportunities before halftime, but the Panthers’ goal-line defence, which has been top-shelf in 2020, held firm.

South Sydney went on the attack early in the second half, but the Panthers defended three consecutive sets to maintain their advantage.

The Panthers defended another attack on their line, but South Sydney eventually found a breakthrough after forcing a repeat set.

Bayley Sironen sliced through the middle from an inside ball, and Adam Reynolds converted to reduce Penrith’s lead to two points after 51 minutes.

The Rabbitohs were beginning to win the arm wrestle, before the Panthers asserted their dominance with a third try in the 60th minute.

Dylan Edwards made something from nothing, as he fended off Braidon Burns and slipped away from two defenders to plant it down and extend the Panthers’ lead.

Cleary missed a third conversion attempt but made no mistake with his next chance, as he landed a penalty goal from out wide to stretch the Panthers’ lead to 14-6 after 70 minutes.

It came James Roberts was sin binned for a professional foul on Stephen Crichton.

Latrell Mitchell then found himself in the sin bin in the 76th minute, and the Panthers moved in for the kill.

Nathan Cleary put the icing on the Panthers cake, as he shrugged off two defenders before taking on the line and muscling his way to the stripe.

The halfback knocked over his conversion to put the Panthers ahead by fourteen points with two minutes left. He was brought off for the closing stages, with Matt Burton coming on.

The Rabbitohs regained possession from the kick-off and scored a consolation through Alex Johnston.

But it was too little, too late for Souths, as the Panthers came away with a well-earned win and temporarily moved into first place on the premiership table.

Naden dives over to open the scoring 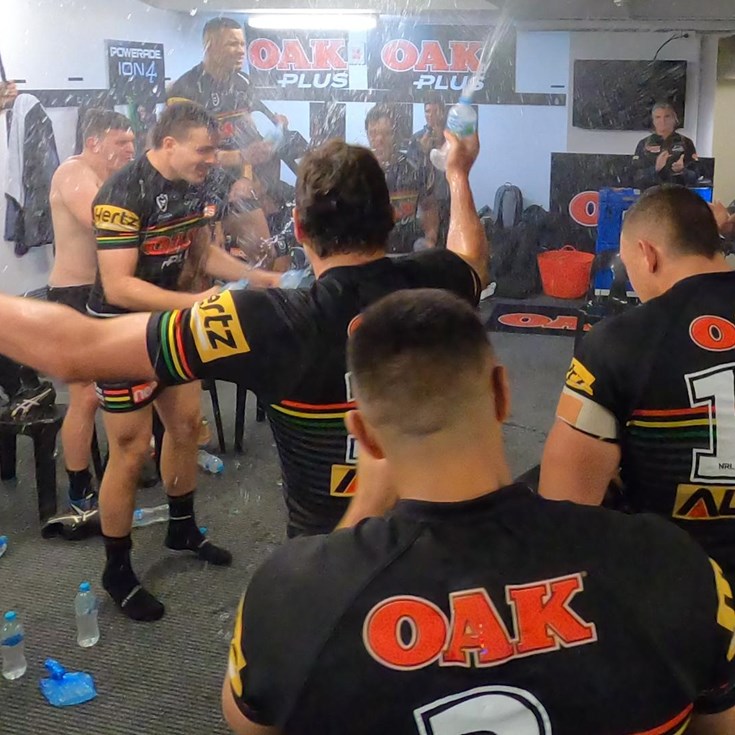