A youthful Panthers survived a major scare to upset Cronulla Sharks 26-20 at Panthers Stadium on Friday.

The gutsy victory propels the Panthers back into the top eight with four rounds remaining in the 2019 regular season.

The Sharks rallied back from a 22-point deficit to set up a grandstand finish, but the young Panthers side showed serious bravery to hold on for a crucial victory. Debutant Stephen Crichton sealed the Sharks’ fate in the dying seconds, defusing a dangerous bomb that had a Sharks try written all over it.

Nathan Cleary stood tall for the Panthers in the absence of James Maloney and with three players on debut. The halfback scored a try, assisted two, forced three drop outs and kicked five goals in his finest performance of the season.

It took debutant Matt Burton just 15 minutes to announce himself to the NRL, putting a perfect kick in behind the Sharks defence for Brent Naden to score the opener.

Nathan Cleary added to an earlier penalty goal to make it 8-0.

Cleary then made something from nothing to catapult the Panthers into a 14-0 lead.

The halfback stepped off his right foot to slice through the middle before finding Dylan Edwards in support to finish off a long-range effort in the 25th minute.

Cleary slices through and puts Edwards over

The Panthers almost laid on a spectacular third try when Brent Naden got an outrageous offload away, but the pass didn’t come off.

Cronulla immediately capitalised on the reprieve, as Shaun Johnson went short to Wade Graham, who broke away to trim it down to 14-4 after 32 minutes.

Viliame Kikau, playing on the right edge in his return from suspension, handed the Panthers one last attack before halftime with a charge down, and they took full advantage.

It was Nathan Cleary who stood tall again, taking on the line to slide over under the posts. His fourth successful conversion put the Panthers 16 points ahead at the break.

Cleary does it all himself

Having lost from a similar position against the Sharks this year, the Panthers were determined not to let it happen again. Their intent was clear as they came flying out of the blocks in the second half.

Nathan Cleary was involved yet again, going out the back for Dylan Edwards to grab his second. He then landed the sideline conversion, making it 26-4 after 45 minutes.

After receiving five straight penalties, the Sharks gave Penrith an almighty scare when Josh Morris crawled over in the 55th minute, but the crowd’s suspicions of a double movement were confirmed by the Bunker.

It would only delay the Sharks however, as they sprung back to life in the 60th minute when Jack Williams spun over. Shaun Johnson’s conversion narrowed the margin to 16 points.

Cronulla’s resurgence continued moments later, when Johnson broke into the backfield and found Morris on his outside. The five-eighth landed the goal, making it 26-16 with 15 minutes remaining.

The Sharks threatened to pile on another when they went on the attack in the 70th minute, before Nathan Cleary swooped on a loose ball.

The Sharks directed traffic at the Panthers right edge in the dying minutes, after Brian To’o was forced off for a HIA. They got their reward in the 75th minute as Sosaia Feki touched down, setting up a grandstand finish.

Shaun Johnson was unable to convert from the sideline, and the Panthers took a six-point lead into the final five minutes. But the Sharks had all the momentum, and they looked destined to complete their comeback.

You could hear a pin drop at Panthers Stadium in the 79th minute when Chad Townsend sent a towering bomb at debutant Stephen Crichton with Sharks players racing through. However, the youngster came up with an almighty leap to defuse the kick, securing a massive two points for the Panthers that sees them leapfrog the Sharks into the top eight. 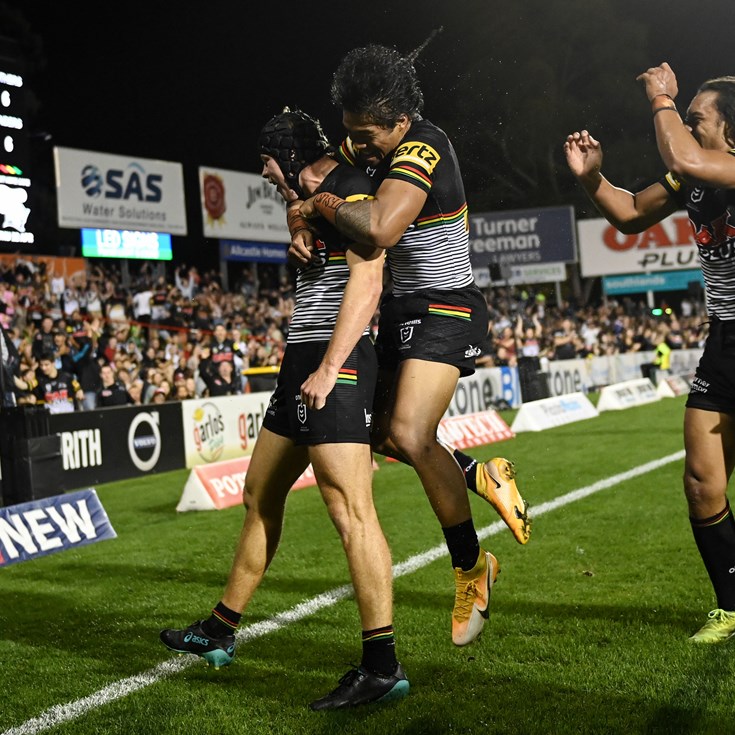 Cleary does it all himself