Newcastle Knights' five-eighth Connor Watson will be having nightmares, after playing a role in two bombed tries in the 29-18 loss to the Penrith Panthers on Friday night.

Penrith were gifted an early chance due to an error from Knights fullback Kayln Ponga, who dropped a high bomb.

It wasn't long before Newcastle's defensive woes again came to the fore, with Reagan Campbell-Gillard strolling through some soft tackling for the first try of the game.

After 15 minutes, Penrith had nearly 75 per cent of possession and off the back of two repeat sets, Tyrone Peachey again showed up some weak defence, to put the ball down next to the posts.

Everything the Knights were doing wrong in defence, they were making up for in attack, with Ponga yet again the standout.

On the back of a penalty the Knights marched up field and kept the ball alive with some impressive passing to put Watson over, to cut the margin back to six.

But the hero soon turned villain as Daniel Saifiti looked to have given the Knights a chance to equalise when he crashed over under the posts – only for the try to be called back because Watson had dragged down the marker.

Newcastle's horrors continued as Watson made a break down field on the next attacking set, but could not link up with his halves partner Brock Lamb who was virtually in the clear. The pass went to ground, Peachey swooped and took the ball down the other end, the move culminating in a try to Dallin Watene-Zelezniak to give the Panthers an 18-6 lead at the break.

The Knights were first to strike after the break when Ponga backed up a break by Lamb to scorch away and score.

But an error off the next set of six gave the ball back to the Panthers, and James Maloney slotted a field goal to make it a seven-point lead, with more than 22 minutes to go. When he chose to take a penalty shot from right in front, the margin was out to nine.

It was a different sort of kick that put the game beyond Newcastle's reach, with the Panthers making the most of their rare time down the Knights' end of the field in the second half. In total control by this stage, Maloney put in a perfectly weighted kick for Corey Harawira-Naera to pluck it out if the air and score his fourth try of the season.

Nathan Ross gave the 14,801 fans who had braved the freezing conditions something to cheer about with a late try, but the home side were left to ponder what might have been had they taken their chances in the first half.

News & notes: Viliame Kikau suffered a shoulder injury in the second minute, but continued playing ... Aidan Guerra dominated first-half tackling, making 35 of the Knights' 208 ... Connor Watson had six first-half tackle breaks, his total for the first nine rounds was seven ... James Maloney had the Panthers' most missed tackles, with eight in the match. 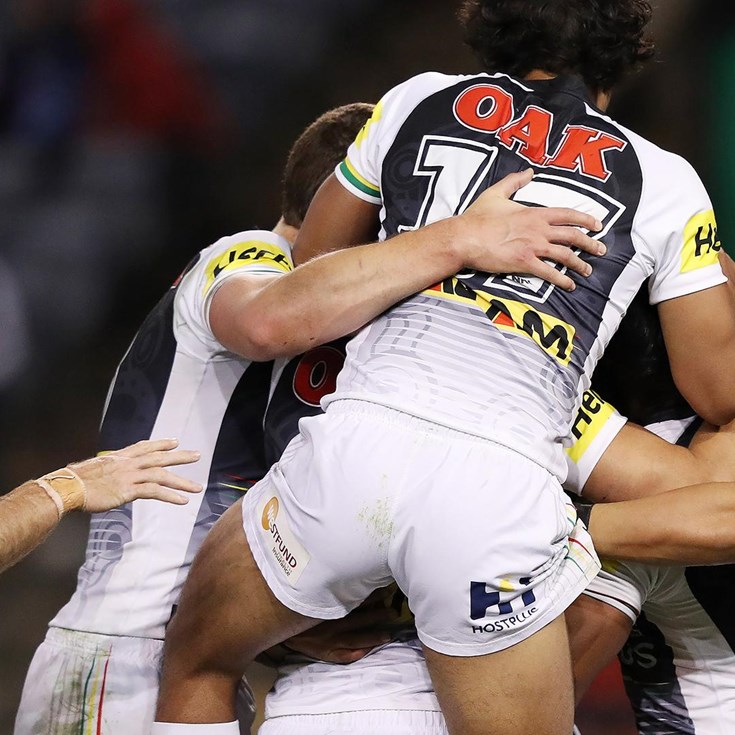 OAK Plus Gallery: Round 10