The Panthers have kicked off their 2018 NRL season in style, coming from behind to defeat local rivals Parramatta Eels 24-14 in front of a sellout Panthers Stadium crowd on Sunday.

After a scrappy start that saw the Panthers fall behind 14-0, the hosts rallied with 24 unanswered points to defeat the Eels in a classic Battle of the West encounter.

The Panthers were given an early scare when Josh Hoffman plucked Mitchell Moses’ cross-field bomb from the air and touched down, but the try was disallowed by the Bunker, who ruled that the Eels winger fumbled the ball in the contest.

Hoffman made no mistake on his next opportunity however, latching onto a cutout pass by Corey Norman and acrobatically diving over on the right wing. Moses converted from the sideline to take the Eels out to a 6-0 lead in the 6th minute.

A 13th minute line break by Dylan Edwards inspired the Panthers to march into the Eels red zone, but were unable to convert their field position into points as Corey Norman came away with the football.

The Panthers looked to have opened their account in the 17th minute when James Maloney sent a blistering pass to Josh Mansour, who acrobatically dived over in the corner. However the Bunker denied the Panthers, ruling that Tyrone Peachey obstructed Hoffman in the buildup.

The Eels took advantage of the Panthers missed opportunity, surging upfield where Corey Norman sliced through Penrith’s goal line defence to score. Norman missed the conversion, with the score remaining 10-0 after 20 minutes.

Ill discipline by the Panthers allowed Parramatta to return to dangerous territory, and the Eels didn’t waste their chance as Brad Takairangi sent Hoffman over for his second. Moses waved his conversion wide, with 14-0 the score line after 27 minutes.

A shoulder charge by Michael Jennings carried the Panthers deep into the Eels half, and the hosts took full advantage as Waqa Blake scooped up an Isaah Yeo tap-on, busted through the Parramatta defence and reached out to plant the ball down. Cleary added the extras to narrow the margin to 14-6 in the 36th minute.

A knock on by Kirisome Auva’a gave the Panthers another chance on the Eels try line in the 39th minute, but were unable to clinch a late try with Parramatta’s goal line defence prevailing.

The Panthers got off to a dream start to the second half, with Peter Wallace delivering a short ball to Viliame Kikau, who muscled his way over the try line to score. Cleary converted, reducing the Panthers deficit to just two points in the 44th minute.

After Mansour crunched Hoffman into touch, handing the Panthers possession in the Eels half, Kikau continued to terrorise Parramatta’s right-edge defence, earning a penalty for Cleary to take the two and equalise at 14-all in the 50th minute.

The Panthers came close to hitting the lead in the 53rd minute when Blake came down with a towering Cleary bomb, however the Eels scrambling defence broke down the play to keep the scores locked.

After Dylan Edwards made a line break and linked up with Cleary, the halfback was dragged down from behind before Mitchell Moses committed a professional foul. The Eels halfback was sent to the sin bin, teeing up Cleary to edge the Panthers ahead 16-14 with a penalty goal.

The Panthers took advantage of the one-man advantage when Cleary split through Parramatta’s defence on halfway before linking up with Blake, who won a footrace to the corner to score his second of the afternoon. Cleary nailed the conversion from the sideline, taking the Panthers out to a 59th-minute 22-14 lead.

After the Panthers made an error on a kick return, Parramatta looked to hit back and came close to doing so when Bevan French dived for the try line in the 68th minute. However the Eels flyer came up inches short of the try line as the Panthers desperate edge defence came up trumps.

Both Edwards and Dallin Watene-Zelezniak had late chances to put the game to bed in the final 10 minutes, but desperate defence by Parramatta saw them both come up empty-handed as the Eels kept themselves alive.

Cleary eventually sealed the win in the 78th minute, booting a penalty goal to hand the Panthers a 10-point win over their western Sydney rivals and kick off 2018 in emphatic fashion. 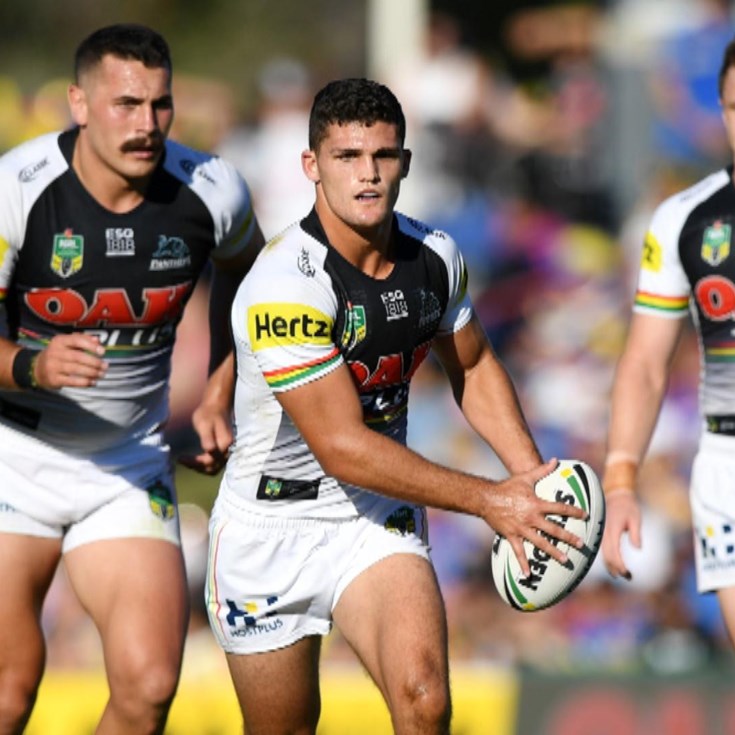 Battle of the West SOLD OUT