The Penrith Panthers have ended the regular season in style, demolishing Western Sydney rivals Parramatta Eels 40-6 after a second-half masterclass.

He thrived playing outside of a flawless left edge, with five-eighth Jarome Luai setting up three tries and four linebreaks while halves partner Nathan Cleary’s kicking and running game was outstanding.

Up front Moses Leota enjoyed one of the best games of his career as he ran for 170 metres to set the platform.

The only concern for Penrith was an injury to interchange forward Scott Sorensen.

The Panthers made a fast start as To’o muscled his way past Blake Ferguson to score the opener.

Liam Martin then almost strolled through to extend the lead but stepped back inside and was wrapped up by the Parramatta defence.

Will Smith later earned the Eels a full set on the Penrith line with a pinpoint kick and soon after Jakob Arthur put it on the boot for centre Tom Opacic.

The Panthers hit back soon after to reassert their dominance as Cleary played short for Tevita Pangai Jr, who spun over for his second try in two weeks.

Parramatta was well up for the contest though, with Smith and Arthur forcing three dropouts in the opening half to heap the pressure on Penrith.

The Panthers defended their line strongly though to maintain a six-point lead heading into the break.

That six-point buffer was quickly added to shortly after play resumed as a slick left-edge set play saw To’o score his second of the night.

In this occasion Cleary double pumped, drawing the Parramatta defence in before linking with Luai who provided the final pass for To’o.

It was the lethal left side that created points once more in the 54th minute with Cleary and Luai combining again.

Tyrone May also played a role in the lead-up, taking the ball up to the line before linking with the halfback and it was all timed to perfection from there as Matt Burton stepped back inside.

Parramatta then kicked the ball out on the full, seeing the Panthers march upfield again and Apisai Koroisau pounced out of dummy-half.

Koroisau jinks and ducks his way through

To’o did not take long to score his third of the night, claiming the first hat-trick of his career after chasing down a Burton kick.

The centre did well to get the boot to ball under pressure after streaming down the sideline off a Viliame Kikau pass.

The rain started to get even heavier at the Gold Coast but it did not mean Penrith went into its shell, with space opening up on the left edge again.

Luai fired the ball to Kikau who quickly linked with Burton and he dumped it off to To’o who ducked and weaved his way through the line before putting Cleary away for a try.

Cleary converted all but one of Penrith’s seven tries. 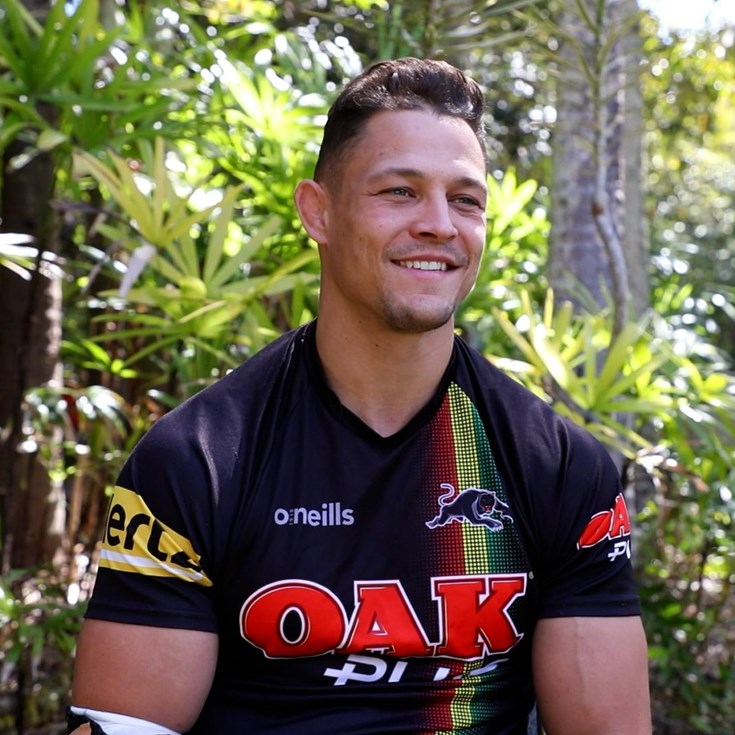