A strong second half helped the NSW Cup Panthers to an upset 24-10 victory over Canberra Raiders at BlueBet Stadium on Friday.

Taking on a team boasting considerable NRL experience, the young Panthers overcame a slow start to secure the win with three second half tries.

The Raiders opened the scoring in the 18th minute after the Panthers were deemed to have obstructed the chasers of a fifth-tackle bomb. From the next set, Canberra lock Corey Horsburgh crashed through some flimsy goal-line defence. The successful conversion gave the visitors a 6-0 lead.

Canberra fullback Caleb Aekins extended the advantage six minutes later as he found himself in space and slipped through the right edge defence. Sam Williams couldn’t convert and the score remained 10-0.

The Panthers hit back with six minutes left before the break. An incisive linebreak from Taylan May lead to a penalty, and from the ensuing possession Izack Tago put in a perfectly-weighted grubber for winger Tom Jenkins to score. Halfback Kurt Falls nailed the conversion from out wide to make the score 10-6.

Five-eighth Jaeman Salmon did it all himself to pull the Panthers level in the 52nd minute. His deft grubber fortuitously rebounded off a defender for Salmon to scoop up and score. The successful conversion from Falls put the Panthers ahead 12-10.

A magical one-handed offload from fullback Brent Naden created another Panthers try with 18 minutes left in the contest. Playing on the right wing, Robert Jennings was on the receiving end and dived over in the corner. The conversion attempt from Falls hit the upright and went over to give the Panthers an 18-10 lead.

The Panthers put the result beyond doubt in the 74th minute as Tago flew high to snatch a Falls chip kick out of the air. 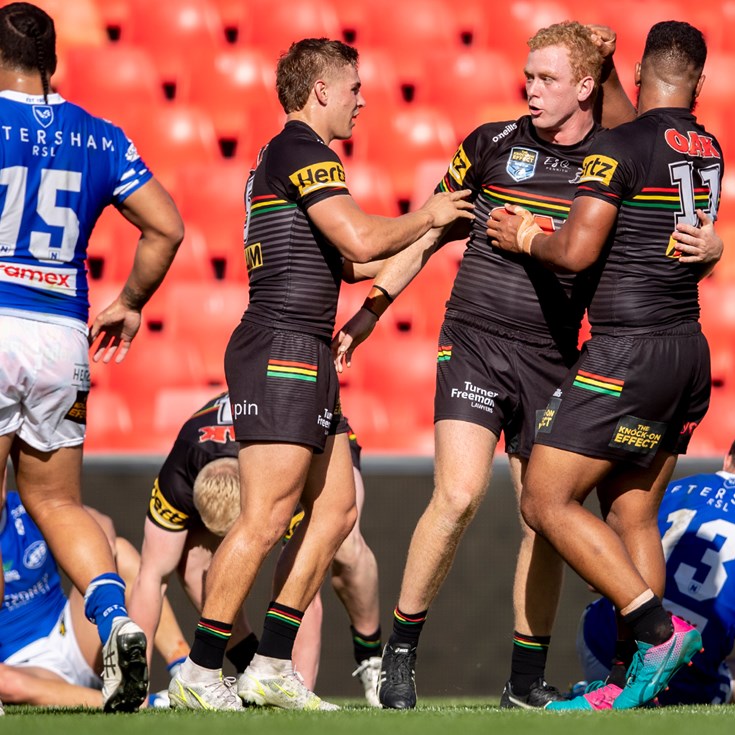