Records have tumbled as the Penrith Panthers shut out the Canterbury-Bankstown Bulldogs 28-0.

Given last week’s 24-0 win over the North Queensland Cowboys, it is Penrith’s second-straight victory while holding their opposition to nil.

It is the first time in NRL history a team has done that in the opening two weeks of the season.

That is not the only record the Panthers broke though, becoming the first team in over 100 years to go three-straight regular season games restricting their opponent to zero (the Panthers won their final-round game against the Bulldogs 42-0 last year).

To top it all off, it was also the first time in club history Penrith have held the same team to nil in consecutive games.

They were testing conditions for both teams at a sodden Bankwest Stadium but it was the Panthers who best handled the conditions with Nathan Cleary’s pinpoint kicking game proving crucial.

Cleary kicked for 540 metres in an all-round exceptional performance, making 17 tackles without missing one and starring with a long-range linebreak late.

He was not the only one either with Viliame Kikau (two tries) and Jarome Luai (two try assists) proving a handful on the left edge.

Brian To’o topped the team for run metres while James Fisher-Harris and Isaah Yeo (in his 150th game) also laid a strong platform up front.

That was despite suffering a bit setback in the lead-up to the game with hooker Apisai Koroisau ruled out with a wrist injury.

Koroisau is expected to spend six weeks on the sideline.

In wet conditions, the assumption would be that both teams would adopt a conservative approach through the middle.

The Panthers though showed a slick pair of hands to perfectly execute a set play on the left as Stephen Crichton ran a decoy line to attract defenders and create space for Jarome Luai to send Viliame Kikau over early for the first try.

Luai’s deceptive ball-playing skills came up trumps again in the dying minutes of the first half, twisting around before kicking inside for Tyrone May who called for the ball.

The temptation in such difficult conditions would have been for complacency to set in but the Panthers remained on top of their game for the entire duration.

Kikau grabs a double against the Bulldogs

Filling in for Koroisau, Mitch Kenny had a classy touch when he held up the pass to send Kikau steaming through a gaping hole for his second.

Cleary was forced off the field late after a high shot and Tyrone May filled in perfectly with a well-weighted kick as Paul Momirovski scored his first NRL try in Panthers colours.

Momirovski made it a double minutes later when he beat three Bulldogs defenders all the way to the line after Dylan Edwards turned the ball back inside. 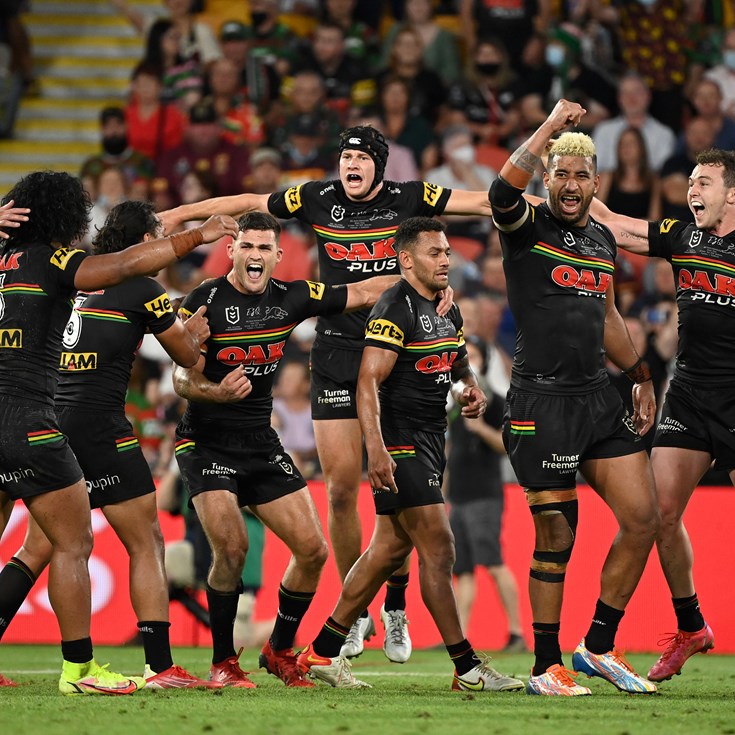