The Panthers’ wonderful 2020 season ended with a devastating 26-20 loss to Melbourne Storm in the NRL Grand Final at ANZ Stadium on Sunday.

The Panthers came agonisingly close to completing one of the greatest Grand Final comebacks ever, after clawing their way back from 26-0 down to trail by just six points in the dying seconds. The game went down to the wire, but a fairy tale Panthers win was not meant to be.

It ended four tries apiece, with conversions and penalty goals proving the difference. But the Panthers could only really have themselves to blame, after letting the Storm fly out to a huge lead and shooting themselves in the foot on several occasions with errors and ill-discipline.

Nonetheless, it was a gallant effort by the Panthers to force their way back into the contest after falling so far behind.

The loss brings a cruel end to the Panthers’ historic 17-game winning streak, the equal-greatest of the NRL era.

The Panthers got off to a spirited start, aiming up in defence to force an error straight from the kick-off. But it was the Storm who opened the scoring, as they were awarded a penalty try in their first attack on Penrith’s goal-line.

The Storm shifted it left for Josh Addo-Carr, who got a pass away to Justin Olam on his inside. Olam lost the ball over the try line, but Tyrone May was penalised for leading with his foot. Cameron Smith was allowed to convert from in front, giving the Storm a 6-0 lead after just four minutes.

The Panthers appeared to have hit straight back in the 8th minute when a set play down the left edge ended with Josh Mansour diving over, but the try was ruled out by the Bunker for obstruction.

Melbourne began dominating field position, before the Panthers went back on the attack in the 17th minute. They came close to scoring on several occasions, but the Storm refused to be beaten on their goal-line.

The Storm reaped the rewards of their defensive efforts, as two penalty goals by Cameron Smith in quick succession extended their lead to 10-0 after 27 minutes.

The Panthers went in search of their first try in the 30th minute, before the Storm delivered a mighty sucker punch as Suliasi Vunivalu took an intercept and went the distance to score. Smith’s conversion made it 16-0.

The Panthers continued to defend relentlessly, but luck was just not on their side. Right before halftime, Cameron Smith had the ball knocked from his grasp, but it sat up perfectly for him to pick up the scraps and stroll over.

The Panthers had a mountain to climb in the second half, and they did themselves no favours by conceding the softest of tries in the 45th minute.

A silly Panthers error gifted the Storm a scrum, from which Ryan Papenhuyzen strolled through some lazy defence and ran 80 metres to score.

At 26-0, the Panthers looked down and out, but they continued to turn up in defence. This was highlighted by Isaah Yeo’s marvellous try-saving tackle on Kenny Bromwich. The Storm looked to have quashed any doubt over the result when Vunivalu pounced on a kick, but he was unable to ground the ball.

The Panthers then finally opened their account in the 52nd minute to give themselves the tiniest glimmer of hope.

Isaah Yeo showed some marvellous skill as he poked a clever grubber to the right wing, and Brian To’o did extremely well to chase the ball down and score in the corner. Nathan Cleary converted from the sideline, reducing the margin to 20 points with 27 minutes remaining.

Both Felise Kaufusi and Brenko Lee came close to scoring in one passage of play, but tremendous try-saving tackles by Dylan Edwards and Josh Mansour would just keep the Panthers alive.

The Panthers would not die wondering, as they further reduced their deficit with a second try in the 68th minute.

Attacking the line, Jarome Luai shifted it to Stephen Crichton. There was nothing on, before Crichton put on a step and beat three defenders to muscle his way to the chalk. Cleary piloted the goal over from out wide, and it was 26-12 with 11 minutes left.

Crichton steps back inside to score

Time was not on their side, but the Panthers were coming home strong. They had a chance to score another in the 71st minute when Cleary grubbered to the in-goal, before Viliame Kikau was taken out illegally by Jahrome Hughes.

The Panthers immediately capitalised on their one-man advantage, as Jarome Luai sent a glorious cut-out pass to the left wing for Josh Mansour to score.

Luai lofts a pass over to Mansour

Cleary was unable to add the extras, leaving the Panthers with less than eight minutes to overcome a 10-point deficit.

With less than one minute to play, Brandon Smith was sent to the sin bin for a deliberate penalty as the Panthers went on the attack. Nathan Cleary immediately carved through the defence and scored with 12 seconds to spare.

The Panthers turned down the conversion attempt, meaning they would have one play from the kick-off to go 100 metres and score a converted try to send the game into extra time.

The Panthers desperately shifted the ball from edge to edge, and gaps did open up. But it just was not to be, as the Storm held on to win the Grand Final. 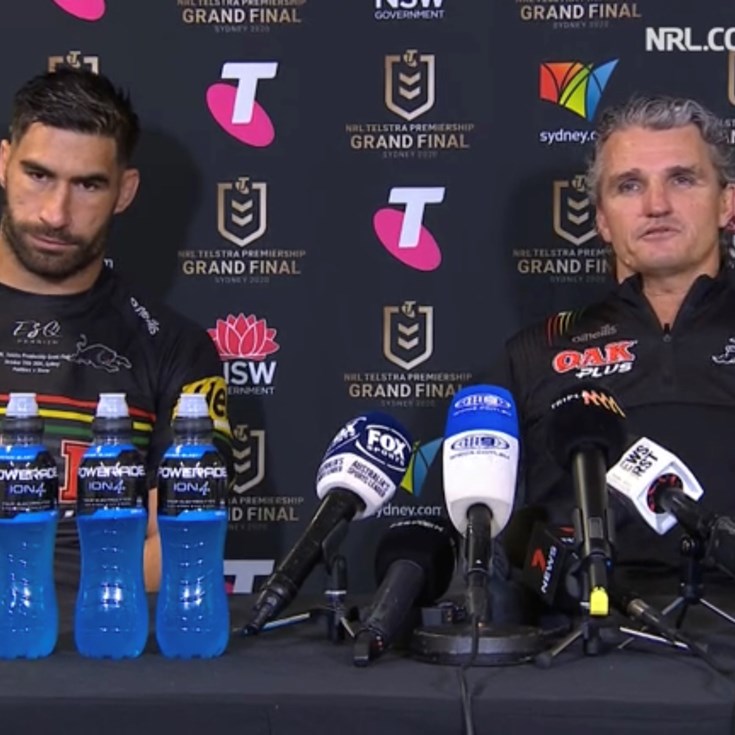 Luai lofts a pass over to Mansour

Crichton steps back inside to score