The Panthers progressed to the NRL Preliminary Finals by defeating reigning premiers Sydney Roosters 29-28 in a thrilling Qualifying Final at Panthers Stadium on Friday.

A 77th minute field goal by Nathan Cleary proved the difference in an enthralling victory, which puts the Panthers just one win away from their first Grand Final appearance since 2003 and sees them earn off Week Two of the Finals.

Cleary’s field goal, which came after he scored a first-half hat-trick, put the Panthers seven points ahead with less than three minutes remaining. But the Roosters refused to go down wondering, and scored a late try after retrieving possession from the kick-off to set up a grandstand finish.

Roosters five-eighth Luke Keary looked to force extra time as he snapped a field goal attempt in the dying seconds, but Api Koroisau and Viliame Kikau rushed up on him and got a touch of the ball to make it fall short of the uprights and secure a famous Panthers victory.

The Panthers found themselves in unfamiliar territory after conceding two tries in the opening ten minutes, before roaring back to life with five consecutive tries to take an 18-point lead in the second half. The Roosters fought back valiantly, but Nathan Cleary’s field goal proved to be the match-winner.

The Panthers will play in the Preliminary Finals in two weeks’ time, where they will look to qualify for the Grand Final and extend their historic winning streak to 16 games.

The Roosters came flying out of the blocks, scoring two tries inside 10 minutes to put the Panthers on the backfoot early on.

The first try came in the 5th minute when the Roosters attacked the short side, and Josh Morris slid over out wide. A few minutes later, Freddy Lussick managed to burrow his way over and give the Roosters a 10-0 lead.

The Roosters threatened to pile on a third shortly after, before the Panthers numbered up to barrel Brett Morris into touch. The Panthers reaped the rewards of their defensive efforts, as they roared to life and scored four consecutive tries to snatch the lead.

The Panthers kicked off their comeback in the 15th minute, as the left edge linked up beautifully for Penrith’s first try. Jarome Luai passed out the back to Viliame Kikau as Stephen Crichton ran a decoy, and Josh Mansour finished off the move with a leaping finish in the corner.

Mansour dives over for the Panthers first try

Dylan Edwards was on the receiving end of an ugly high shot by Jared Waerea-Hargreaves in the 20th minute, but he bounced back to his feet to set up the Panthers’ equalising try.

Attacking the line, Edwards picked up an offload from Liam Martin and passed to Nathan Cleary on his inside for the halfback to score under the posts. Cleary added the conversion to make it 10-10 after 22 minutes.

The Panthers completed their recovery from the slow start a few minutes later, snatching the lead with their third try.

After a strong charge by Viliame Kikau, Jarome Luai jumped out of dummy half on the last tackle. Luai then poked a delicate kick through the Roosters’ defensive line, and Nathan Cleary jumped on the ball to slide over for his second try.

With Cleary’s conversion, the Panthers led 16-10.

The Roosters slowly begun to work their way back into the contest, before the Panthers extended their lead as Nathan Cleary scored his third try within 15 minutes.

Forty metres out from the try line, Cleary fired a long pass to Luai, who showed some dazzling skill before he popped up the ball to unleash Stephen Crichton on his inside. Crichton broke into open space, and then found Cleary backing up on his inside to complete a stunning first-half hat-trick.

Cleary on the spot for first half hat-trick

Cleary added the extras, sending the Panthers into halftime with a 12-point advantage.

The Panthers went straight back on the attack early in the second half, after Liam Martin’s crunching hit on Freddy Lussick forced an error. Penrith took the opportunity with both hands, scoring a fifth try to further extend their lead.

A high kick by Nathan Cleary was impressively batted down by Jarome Luai to Tyrone May, who shifted the ball over for Stephen Crichton to score out wide.

Crichton scores his sixteenth try of the season

Cleary stepped up with a crucial conversion to give the Panthers a 28-10 lead after 50 minutes.

But the Roosters were not done with yet and forced their way back into the contest when James Tedesco muscled his way to the try line. Kyle Flanagan’s goal kick made it 28-16 with 25 minutes remaining.

The Roosters immediately went in search of another try, but the Panthers bravely defended their line for an extended period and came away with possession.

But soon after, a penalty delivered the Roosters prime field position, and this time they capitalised. Luke Keary chipped a kick into the corner, and after the Panthers failed to clean it up, Josh Morris pounced on the scraps. Flanagan added the extras, and it was a six-point ball game with 15 minutes to play.

The Roosters needed just one converted try to equalise, but the Panthers denied them any decent field position with some wonderful defence in the closing stages.

Then, with less than three minutes remaining, Nathan Cleary put the Panthers within touching distance of the Preliminary Finals when he coolly landed a field goal, stretching the margin to seven points.

But the Roosters drew a penalty from their short kick-off, giving themselves a glimpse of hope with only a few minutes left. Moments later, Angus Crichton sliced through out wide, and Kyle Flanagan converted to make it 29-28 with less than two minutes to play.

The Roosters surged upfield with their final possession, delivering Luke Keary into field goal range. The five-eighth got his shot away, but Viliame Kikau and Api Koroisau converged on him and got a touch on the ball as it fell short of the uprights.

The Panthers took possession, and survived the final few seconds to put themselves just one win away from a Grand Final qualifier. 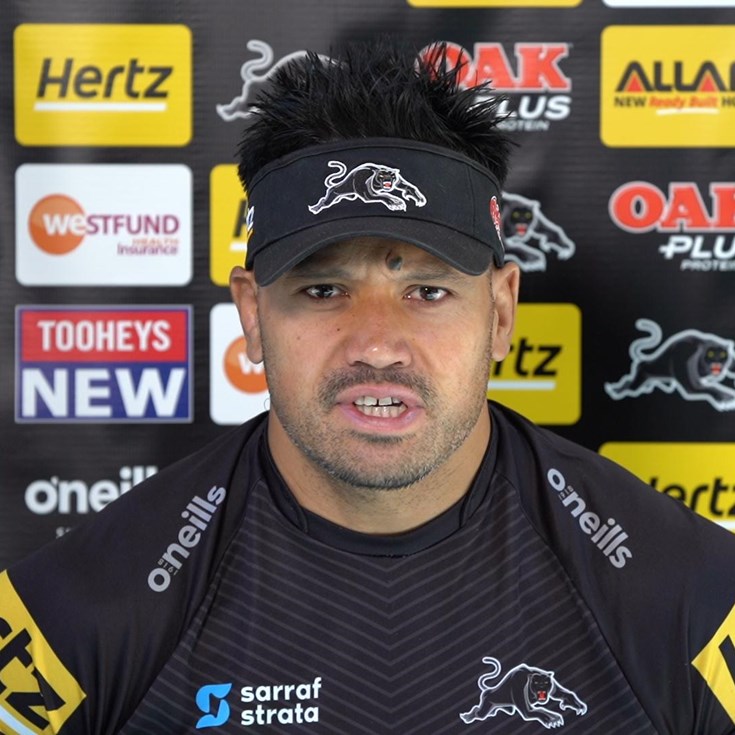