The Panthers secured a top 2 finish and a home qualifying final by defeating the Parramatta Eels 20-2 in a comprehensive Battle of the West victory.

Parramatta were the only team to have beaten the Panthers in 2020, but the Panthers were by far the better side on this occasion as they kept the Eels try-less and extended their club-record winning streak to 13 games.

The Panthers had a frustrating start to the game as they could not convert their dominance into points, but they stayed focused and came powering home for a big win over their western Sydney rivals.

Josh Mansour scored the first try in the closing stages of the first half, before Liam Martin and Jarome Luai scored in the second half to kill off the game.

The result means that the Panthers will finish in the top 2 at the end of the regular NRL season, and play a qualifying final at Panthers Stadium.

The Panthers dominated the early stages, but just could not find a way to score. Within the first 20 minutes, the Bunker had disallowed four potential Panthers tries and controversially knocked back a captain’s challenge.

The Panthers maintained the intensity throughout the first half, continuously rolling upfield and aiming up in defence, with Reagan Campbell-Gillard copping lots of special treatment.

But it was the Eels who eventually opened the scoring after 29 minutes, when Mitch Moses kicked a penalty goal. It came shortly after the Panthers were pinged for a crusher tackle when Ryan Matterson stayed down.

Several more chances came the Panthers way, but luck was not on their side as the Eels continued to turn them away.

Despite the frustrating situation, the Panthers stuck to their systems and persistence would eventually pay off.

The Panthers got their long-awaited try in the final play of the first half, when Jarome Luai attacked the short side and sent a looping cut-out ball to Josh Mansour, who dived over in the corner.

Mansour dives over on the stroke of half-time

The Panthers had a nervy start to the second half, as the Eels begun to win the battle for field position and Spencer Leniu was forced off for a HIA just moments after coming onto the field.

But the Panthers kept their composure, and scored with one of their first attacks of the second half.

When Nathan Cleary chipped over the Eels goal-line defence, Liam Martin came flying through and rose above the pack to come down with the ball and score a crucial try.

Martin plucks it from the clouds

The halfback added the conversion for the Panthers to lead 12-2 after 57 minutes.

Cleary gave the Panthers another attacking opportunity when his towering bomb was spilled by Blake Ferguson, but no points came from it. The Panthers were set to add a penalty goal to their tally, before the officials bizarrely overturned their penalty ruling to instead award a repeat set.

The Panthers were forced to play the final twenty minutes without hooker Api Koroisau, after he left the field for a HIA.

The Eels were pushing for a try to set up a grandstand finish, before Nathan Cleary kicked a terrific 40/20 and then a penalty goal to put the game to bed.

But the Panthers were not done with yet, as a spirited kick chase by Viliame Kikau and Stephen Crichton forced an error from Clint Gutherson and set up one final attack.

Jarome Luai delivered the killer blow, as he charged at the Eels goal-line defence and muscled over for a try.

Cleary then kicked the conversion to wrap up a commanding win over the Panthers top 4 rivals. 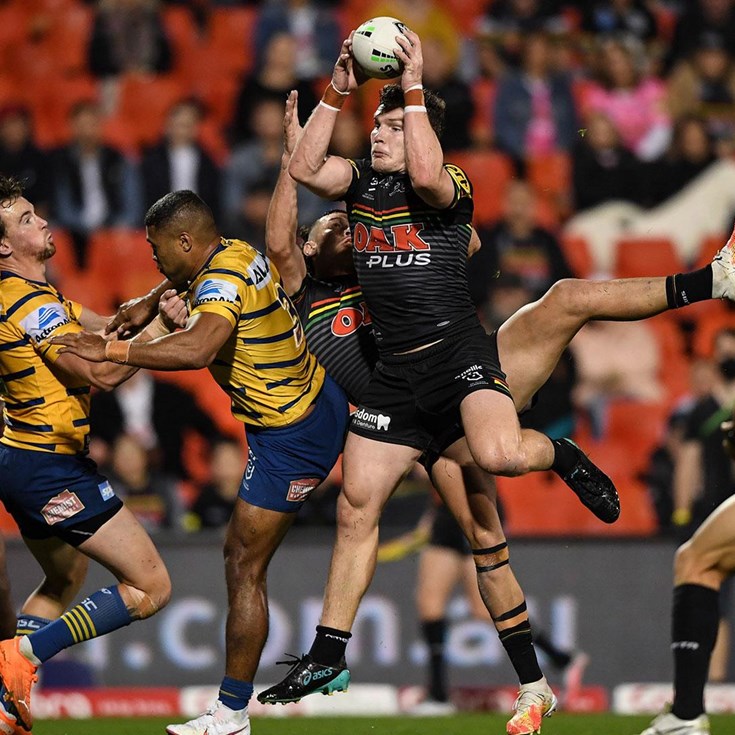 Martin plucks it from the clouds

There's a fire in the belly to beat Parramatta: Mansour

Tickets for Battle of the West snapped up