The Panthers opened up a three-point lead at the top of the NRL ladder, as they thumped the Cronulla Sharks 38-12 at Panthers Stadium on Friday.

The Panthers were clinical in attack, scoring seven tries to extend their historic winning streak to ten games, while making it three-straight victories against the Sharks.

Josh Mansour marked his 150th NRL apparance with two tries, while Liam Martin celebrated his new Panthers deal with a stunning solo display. Martin terrorised former Panthers captain Matt Moylan all night, as he scored a try and assisted another. 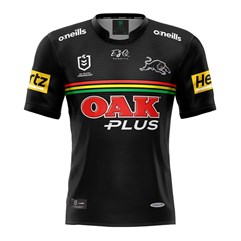 The Panthers’ remaining tries came through Viliame Kikau, Brent Naden, Stephen Crichton and Jarome Luai, in a 26-point victory that sees them enter the final five rounds of the regular season clear at the top of the table by three points.

The Panthers flew out to a 16-0 lead early on, as they made it fourteen-consecutive games of scoring the first try and keeping their opposition scoreless in the opening 20 minutes.

Viliame Kikau scored the opening try in the 3rd minute, after Isaah Yeo faked to pass out the back before going short to the second rower, who was unstoppable from close range. Nathan Cleary converted, and the Panthers had an early 6-0 lead.

Kikau opens the scoring in style

And after defending two sets on their own line, the Panthers marched back upfield and scored with their next attacking opportunity.

The Panthers kept the ball alive and shifted to Jarome Luai, who attracted several defenders with his fancy footwork. Luai then fired a sizzling cut-out pass to milestone man Josh Mansour, who touched down in the corner to make it 10-0.

The Sharks threatened to hit back when Sione Katoa found Will Kennedy on his inside, but Nathan Cleary came up with a try-saving cover tackle. Moments later, the Panthers had their third try.

Liam Martin stormed past Matt Moylan and Josh Dugan to break into open space from inside his own half. Then, after sidestepping fullback Will Kennedy, Martin found Brent Naden pushing up in support to score. Cleary converted to make it 16-0 after 20 minutes.

Martin goes on a rampage to set up Naden

The Sharks pulled one back in the 27th minute when Jesse Ramien muscled over from dummy half, but the Panthers regained their 16-point lead on the stroke of halftime.

A clever one-on-one strip by Api Koroisau put the Panthers on the attack, and Nathan Cleary kicked high for Stephen Crichton to jump above the Sharks defence and come down with the ball. Cleary added the extras from out wide, as the Panthers took a comfortable lead into the break.

Both sides were denied a try by the Bunker in an exciting start to the second half. Sharks forward Jack Williams’ impressive run was pulled back for a knock on, before Panthers centre Tyrone May came up millimetres short of the line.

There was no denying the Panthers on their next chance though, as Liam Martin bagged a well-earned try shortly after stripping the ball off Matt Moylan. Nathan Cleary went short to Martin, who charged twenty metres to score in the 50th minute.

Martin beats Moylan and goes all the way

Cleary landed his conversion attempt, pushing the Panthers out to a 28-6 lead.

An avalanche of Panthers attack ensued, and another two quick-fire tries saw them stretch the margin to 32 points.

A prolific try-assister, Jarome Luai used his signature footwork to score one for himself in the 56th minute, as he danced his way around three defenders to cross.

Luai steps his way to a four-pointer

Josh Mansour’s big night reached new heights in the 63rd minute, as he applied the finishing touch to a routine backline movement to make it two tries in his 150th NRL appearance.

Api Koroisau was given a much-deserved spell for the final twenty minutes of play, as rookie Daine Laurie was given a chance by Ivan Cleary.

The Panthers were beaten out of dummy half for a second time late on, as Connor Tracey scooted his way over for a Sharks consolation try.

The Sharks pushed for another, but the Panthers continued to defend their line relentlessly and celebrate their tenth-consecutive victory and Josh Mansour’s milestone game in style.

Hertz Plays of the Week: Round 15