The Panthers equalled their club record winning streak of eight games as they defeated Canberra Raiders 28-12 in a fiery clash at Panthers Stadium on Saturday.

Another fast start had the Panthers coasting, as they led 24-0 at halftime on the back of clinical attack and relentless goal-line defence. The Raiders fought their way back into the contest in the second half and tensions began to boil over, but the Panthers held their nerve to come away with a win over last year’s grand finalists.

The 16-point victory sees the Panthers equal the club-record eight-game winning streak set by the 2003 premiership-winning team, and continue their stint at the top of the NRL ladder.

Kikau opens the scoring against Canberra

The Panthers had a nervy start to the match, as they did not touch the ball once in the opening six minutes. But the Panthers remarkably defended four consecutive sets on their own line, before scoring with their first attacking opportunity in the 10th minute.

With the Panthers’ first attacking opportunity, Viliame Kikau charged onto an excellent pass from Nathan Cleary, and sliced through for the opening try. Cleary added the conversion to give the Panthers a well-earned 6-0 lead.

The Panthers quickly doubled their lead, scoring with their next possession in the red zone.

Api Koroisau jumped out of dummy half and attracted several defenders before he quickly changed direction and put it on the chest of Liam Martin, who strolled over as the Panthers’ edge forwards continued to wreak havoc. Cleary’s conversion made it 12-0 after 18 minutes.

A last-ditch effort by Cleary and Koroisau denied a rampaging Josh Papalii from close range, and the Panthers were again rewarded for their defensive efforts.

The Panthers marched upfield and piled on a third try in the 34th minute, as Stephen Crichton pounced on Jarome Luai’s deft kick to the in-goal, a play the pair have mastered in 2020. Cleary landed the conversion from out wide, stretching the lead to 18-0.

Ruthless in attack, the Panthers then posted a fourth try on the stroke of halftime.

Tyrone May sent a terrific cut-out pass to Brent Naden, who tiptoed down the wing before leaping over in the corner acrobatically. Cleary converted from the sideline, and the Panthers left the field with a standing ovation from the home supporters.

Jack Wighton made a line break to put Canberra on the attack early in the second half, but he was tracked down by Jarome Luai and the Panthers held on once again.

However, after the Panthers made an error in their own half, the Raiders finally scored their first try. Charnze Nicoll-Klokstad was seemingly wrapped up by the Panthers goal-line defence, but the Bunker green-lit a contentious on-field try ruling.

Viliame Kikau drew a penalty after he popped up on the right edge in the 57th minute, and Nathan Cleary took the two to increase the Panthers’ margin to 20 points.

George Williams appeared to have set up an interesting finish when he cut through the Panthers’ left edge in the 60th minute, but the Bunker spotted an obstruction on Kikau.

Four consecutive penalties—some of which were rather controversial— and a set restart gifted the Raiders an extended period on the Panthers’ line. Despite some more wonderful Panthers defence, Canberra eventually found a breakthrough as they shifted it left for Nicoll-Klokstad to slide in.

The conversion by Croker set up an interesting finish at 26-12 with 15 minutes to play.

Despite a piece of foul play by Jordan Rapana on Josh Mansour, the Raiders were back on the attack soon after. But the Panthers’ goal-line defence was up to the task, and Canberra came up empty handed with seven minutes to play.

Debutant Daine Laurie was injected at fullback in the closing moments and looked dangerous from the outset.

Nathan Cleary wrapped up the win with a penalty goal after the full-time siren, as the Panthers celebrated a record-equalling eighth-straight victory. 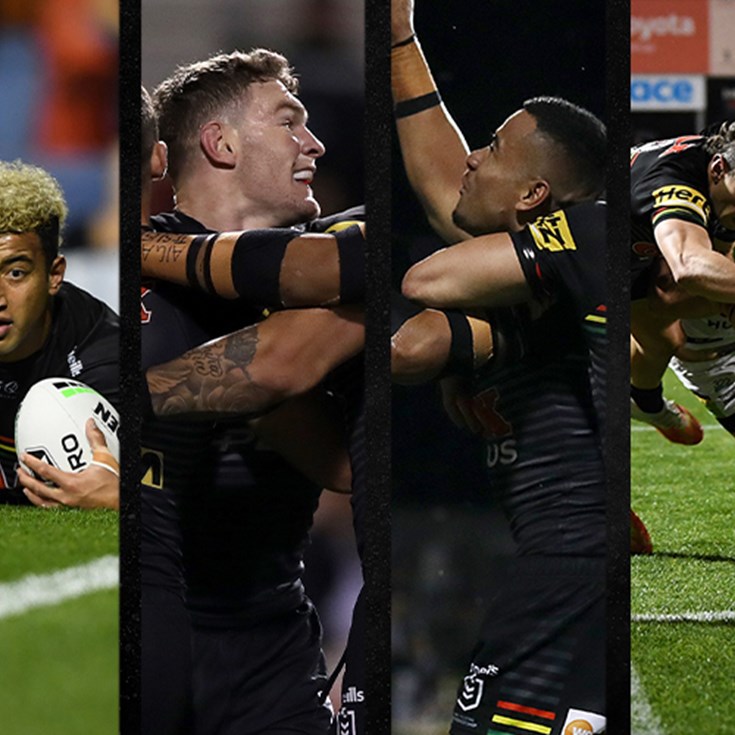 Hertz Plays of the Week: Round 13

Kikau opens the scoring against Canberra