The Panthers pushed through the absence of several injured players to defeat the Gold Coast Titans 22-14 in a tight contest at Cbus Super Stadium on Sunday.

The Panthers were without four players from last week’s victory over North Queensland, Viliame Kikau and Api Koroisau among them. And while it was a scrappy performance on the Gold Coast, the understrength Panthers did just enough to make it six consecutive wins and return to the top of the NRL ladder.

The Panthers got off to a fast start, scoring three tries in the first half through Josh Mansour, Stephen Crichton and Isaah Yeo. But the Titans hung in and scored three tries of their own to set up a nervy second half for Penrith.

The game was hanging in the balance, before a 60th-minute try to Malakai Watene-Zelezniak in his first appearance of the year put the Panthers beyond Gold Coast’s reach.

The loss of Viliame Kikau weakened Penrith’s left edge, but that did not stop them from going down that channel for their first two tries, both assisted by Jarome Luai.

The Panthers scored their first try in the 9th minute from a rehearsed backline play. Luai used Stephen Crichton as a decoy before passing to Josh Mansour, who juggled the ball and dived over in the corner.

Mansour opens the scoring against the Titans

For the second try, the Panthers shifted it left from the 30-metre line. James Fisher-Harris threw it out the back to create space, and Luai sent Stephen Crichton streaking away for his tenth try of the season.

Nathan Cleary converted to give the Panthers a 10-0 lead after 17 minutes.

The Titans were on the ropes, but a stroke of luck allowed them to pull back a try.

As the Panthers attacked the line, a kick to the in-goal deflected and sat up for Jamal Fogarty, who ran 90 metres to score. Ash Taylor missed the conversion, and it remained 10-4 after 25 minutes.

But five minutes later, Penrith reasserted their authority with a third try.

After going wide for their first two tries, the Panthers went straight through the middle, as Isaah Yeo took it to the line before reaching out to plant it down. Nathan Cleary knocked over the goal to put the Panthers ahead 16-4 after 32 minutes.

The Panthers were well on top at this stage, and the Titans looked down and out. That was, until a late lapse in concentration by Penrith allowed the hosts to score twice and nullify the Panthers’ first-half dominance.

After the Panthers gave up possession deep in their own half, Brian Kelly tracked down a kick in behind by Ash Taylor to score in the 37th minute.

Then, a penalty shortly after the kick-off marched the Titans back upfield. They made it to the goal-line, where Anthony Don caught Penrith napping on the short side and scooted over to make it a two-point ball game.

The Panthers upped the intensity when they returned for the second half, immediately going on the attack. A Nathan Cleary chip kick was very threatening, but the Titans held on.

Rain began to pour down on the Gold Coast, but it did not impact either side’s willingness to throw the ball around. An end-to-end battle broke out, but points proved elusive. The Panthers eventually gained the upper hand and scored a much needed try in the 60th minute.

The Panthers chose to run the ball on the last tackle, and an excellent pair of passes by Nathan Cleary and Brent Naden sent Malakai Watene-Zelezniak over the line.

Cleary then gave the Panthers an eight-point buffer with the conversion.

The Panthers moved in for the kill in the 68th minute, but some suspected interference on Josh Mansour in a try-scoring situation was overlooked by the Bunker, and the Titans came away with the ball.

Gold Coast were still in with a chance, but a clever kick by Nathan Cleary forced a drop out and inched the Panthers closer to victory.

The Titans defended the ensuing attack, and had a chance of their own late on, but an intercept by Brent Naden ensured the Panthers a fifth-straight win and top spot on the NRL ladder for another week. 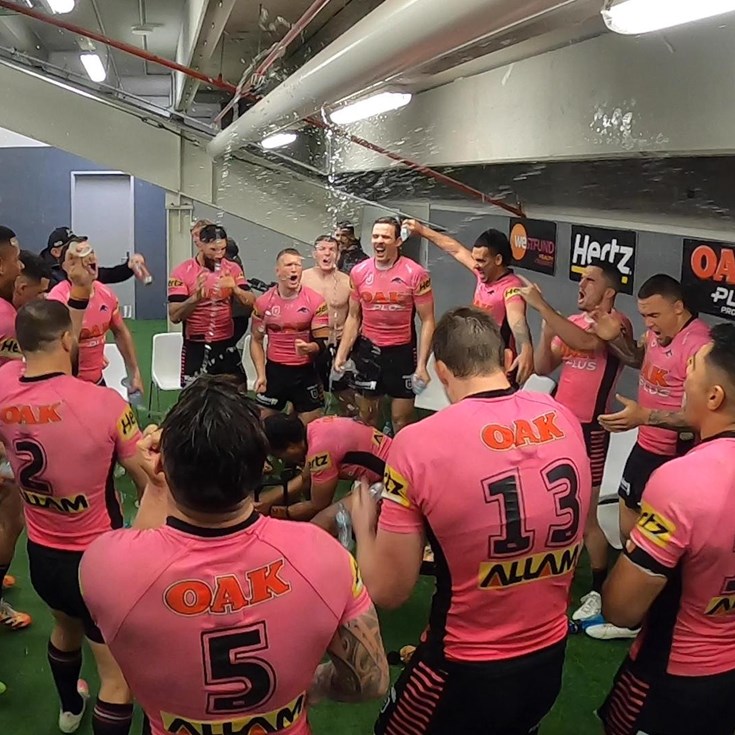 Cleary confident as reserves get their shot

I'm no Api but I'll bring the energy: Kenny