The Panthers have temporarily moved to the top of the NRL ladder and maintained their undefeated start to the season with a dominant 26-0 shutout win over the Warriors.

It is the first time since 1997 that Penrith have been undefeated through the opening four games of the season.

The Panthers turned the tables on the Warriors, who had only the week prior held the Dragons scoreless.

Matt Burton and Jarome Luai combined beautifully while Apisai Koroisau was a constant threat from dummy-half.

But it was the barnstorming performance from James Fisher-Harris that caught the most attention as he ran for 239 metres and made 31 tackles in a tireless display.

The Panthers skipped out to a 10-0 lead within 25 minutes, courtesy of Matt Burton’s first two NRL tries.

The opening try came when Jarome Luai’s cross-field kick was batted back by Stephen Crichton and into the hands of Burton, who scurried over to score. Crichton added the conversion to make it 6-0 after 12 minutes.

Burton bagged his second try in the 21st minute, when he blocked a low kick by Blake Green, picked up the loose ball and dashed away to make it 10-0.

The Warriors gave Penrith a scare as they went on the attack late in the first half, but the Panthers turned them away and piled on a third try before halftime.

Burton grabs a first half double

Burton was involved once again, as his towering bomb was put down by Warriors winger Patrick Herbert. Two plays later, Jarome Luai rolled a grubber to the in-goal and pounced on the football.

Luai pounces on his own kick

Stephen Crichton knocked over the conversion to give the Panthers a commanding half-time lead.

Two minutes into the second half, the Panthers stretched their lead to 20 points in scintillating style.

Following a Moses Leota line break, the Panthers shifted it to the left edge where a lovely flick from Viliame Kikau created numbers.

Stephen Crichton then linked with Josh Mansour who crossed over untouched out wide.

The Panthers continued the charge as Burton and Luai combined to send Billy Burns steaming through for the fifth try of the night. 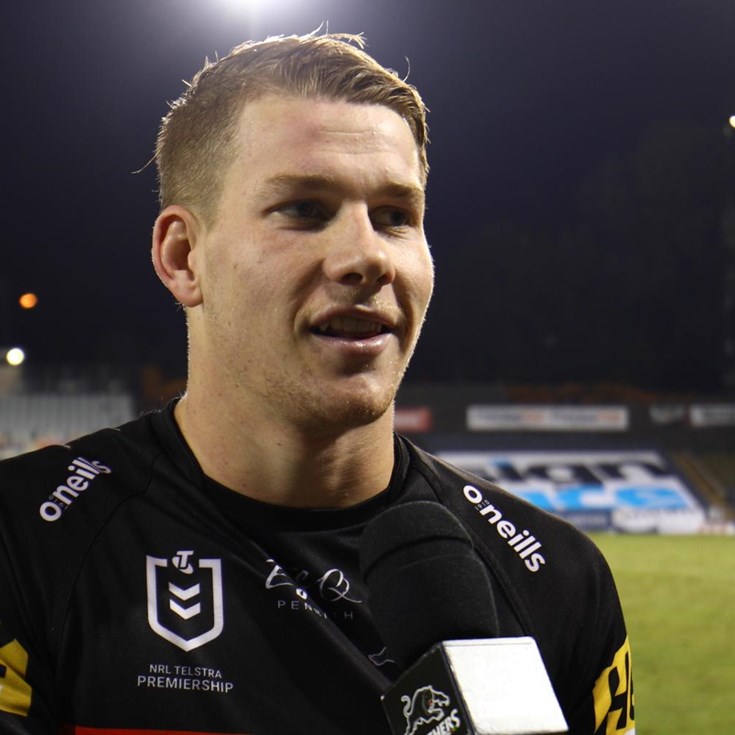