Scott Sattler etched his name in grand final folklore with his cover tackle on runaway Roosters winger Todd Byrne in the 2003 decider but there was so much more to his career than that moment.

In this Legend Q and A first published in Rugby League Week in 2013, Sattler talks about growing up as the son of a league legend, almost going broke at the South Queensland Crushers and fun times with Mark Geyer at the Panthers.

What stands out about your famous tackle on Roosters winger Todd Byrne in the 2003 grand final?

I look at it in the third person, like I am a spectator now. I made the tackle and there was this stony silence, like an echo. On the footage you see Tony Puletua hovering over Todd Byrne and giving him an absolute mouthful and I remember hearing that.

Gone are the days where locks are meant to cover but our coach John Lang always said that if I was on the opposite side of the ruck, and the ball went the other way, to start running in behind the line. He prepared me for that situation.

Every Wednesday for four years I’d go and run this disused train line in the Blue Mountains. There was this old set of steps I’d run and there were 83 of them. A kid from university did a thesis on how I prepared for games and came on a couple of those sessions with me. He said, 'Do you know how many steps you take on those runs?' I said '83'.

Then he said, 'Do you know how many steps it took to chase Todd Byrne?' I said 'No'. He said, 'It was 83'. John Lang prepared me for it in the way he wanted locks to play, but it was nice to know all those extra sessions I did prepared me for it as well.

Your dad John Sattler left an amazing legacy. What were the expectations on you growing up?

Living in his shadow wasn’t pressure for me. When you get to an age where clubs start taking notice, a name like Sattler stands out. It’s not like a Smith or a Brown. It put pressure on you to perform, but if you did perform then people stood up and took notice.

You grew up in pubs. How did you handle it?

We were living in pubs since I was four. It was a great upbringing. It gave me the ability to communicate with people whether they were bricklayers or barristers. My dad was, and still is, a fit and healthy guy. He’s always been known for holding his hands up and every week a potential upstart would deliberately come in to the pub to make a name for themselves by knocking John Sattler out.

Every one of them left with their tail between their legs, less teeth in their mouth, less blood in their body or on a gurney on the way to the ambulance. It made me pretty street-smart.

But you say he was beaten once?

Dad was loading some kangaroos on the back of a truck to go to Hamilton Island in the early 1980s when the island opened. There was a big six-foot-two red kangaroo that reared up at dad. It took a swipe and dad took a swipe back and hit the kangaroo on the end of the chin.

The kangaroo sat back on its tail and kicked dad over and proceeded to bash the crap out of him while he was on the ground. Dad still has the scars all over his body from that big red kangaroo. It was the only time I saw dad get beaten.

Tell us about playing with Wally Lewis at the Seagulls?

When we heard Wally was coming to the club, I was like a kid in a lolly shop. Being a young guy, it was also quite daunting. But I still regard him as a good mate because he always treated me with respect as a young guy and taught me a lot. I was blown away in my first-grade debut against Parramatta when we got a penalty and Wally conducted a set of six that he said would guarantee us a try.

As an 18-year-old, I thought how could that happen. But on the fourth tackle we scored a try exactly how he planned it. The football field for him was like a chess board. You read a lot about how he was the maestro, the king and could do whatever he wanted. But to see it in real life was amazing to witness.

Looking back at the 2003 NRL grand final

What was it like playing at the South Queensland Crushers?

You never had to reach into your pocket for anything. I was a South Sydney fan so it was a highlight of my life being able to spend every day with Mario Fenech. He was inspiring to play alongside and the ultimate professional.

Have you got a funny Mario story for us?

His speeches before the games were JFK-like. They could go for 10, 20, 30 or 40 minutes. In the end all the players would say, 'Hey Mario, we’ve got to be on the field in a sec'. He’d always say in his speeches that 'the wheel turns… the wheel turns'.

He was saying if things aren’t going your way, the wheel will turn and come back your way eventually… a bit like karma. I played in the game when Mario ran into the line of a pass that hit him on the head. We all lost it, laughing on the field and thinking it would make the replays. Little did we know 'The Falcon' was unearthed.

Then the Super League war broke out in your second year at the Crushers. What was the atmosphere like around that time?

We got told before our first game that our wages might not be paid. Graham Richardson, the Labor Party politician, came up and said he was going to fight for us but we never saw him again.

We got told we could fight it in court, or we could take a percentage which is what we did. We were playing for the love of it, which is what rugby league was built on.

Did you get paid?

One day the Crushers said to come and pick up my cheque for the season. I’d struggled to make mortgage payments for four months and I was too scared to open the envelope. I’ll never forget driving down the freeway south of Brisbane and pulling over on the side of the road.

I looked across at the Gabba in the distance, opened up the cheque and it said $5500. I remember breaking down in tears and thinking, 'What am I going to do? I’m going to have to sell my house and start from scratch'.

An hour later I dropped in to see my dad at his pub on the Gold Coast to ask for some direction. He said, 'I’ve just received a call from Phil Economidis and they want you to come back to the Gold Coast'.

And you had a great two years…?

We made the semis the first year and I didn’t miss a game in two seasons. Then I heard from Rugby League Week editor Tony Durkin that the Chargers weren’t going to be in the competition in 1999.

We played Penrith, I got player of the match and then I got a call from Royce Simmons the next day to fly down. I signed a great three-year deal. It meant that everything I’d lost over the previous  years I was able to make up again. Royce taught me the importance of preparation and I got to play alongside Mark Geyer, Ryan Girdler and Greg Alexander.

MG would have entertained you no doubt?

He used to steal everything from his teammates. He’d turn up at training with his boots and training gear and when we’d finish he’d walk in the sheds, have a shower and grab someone else’s towel and dry himself.

Then he’d find someone’s clothes, put them on and get in his car and drive away. He left with more than he arrived with. MG is famous for saying, 'Hey listen, you and I should hang out and do something'. I remember 'Brandy' Alexander saying he had to put this roofing on his pergola.

MG said, 'We should do a working bee and get someone to help you’. Being the new kid and just living around the corner, I said, 'I’ll help'. For the next six hours in the middle of a Penrith summer I was the one up the top drilling, screwing and do all the work while the other two were underneath drinking beers in the shade. I was up their sweating my arse off with third degree burns on my back and nose. But I would have done it again because it was Brandy and MG.

You were a big fan of Royce Simmons. How was it when he was replaced by John Lang?

I held Royce Simmons in high regard as a coach and a friend. But in 2001 a few players created a mutiny. It was disappointing because I supported Royce and didn’t think it should be done that way.

There were a lot of changes, Johnny Lang came in… and we went on to win the premiership. Johnny Lang simplified the game and tapped into what made guys like Tony Puletua, Joe Galuvao, Rhys Wesser and Craig Gower tick. We were second-last in 2002 and won it in 2003 and that was because of the subtle touches he made to those guys individually.

I use things I learned off John Lang in business and in life now… things like the building blocks to success and that if you can’t change the situation then change your attitude.

You played one Origin game for Queensland in 2003 where you alternated between lock and hooker. Is it true the guy that replaced you was pretty handy?

I was 31 and playing one Origin for Queensland  was like playing 10. It was a great personal achievement, but we lost, and the next game I was left out and Wayne Bennett brought in a guy called Cameron Smith.

My mates, as all mates do, rang to console me about being left out. They said, ‘Who is this mug they have picked called Cameron Smith? Don’t worry mate, he won’t be there next  year’. Cameron went on to become our greatest ever hooker so I joke at functions that I’m just glad I started the career of Cameron Smith.

Do you regret retiring at the Wests Tigers at the end of 2004?

I had a recurring knee injury. I played the whole of 2004 and got defensive player of the year. I had another season to go, but with seven games left I was really struggling.

I told Tim Sheens I wanted to give them the opportunity to find someone for the next year or upgrade some of the younger blokes. We missed out on the semis by one point, but in December Tim rang me and said, 'Can you come back. I want you to be captain'.

I wanted to return, and financially I probably should have, but it would have gone against everything I believed in. I would have limped around the field and not given him everything I wanted to. They won the comp in 2005 and I remember Sheensy ringing me the next morning saying, 'I wish you were here. You should have been part of this'.

But there was not one part of me that said I could have won two premierships. It was great to win one... and honestly, I wouldn’t have finished the year in 2005. 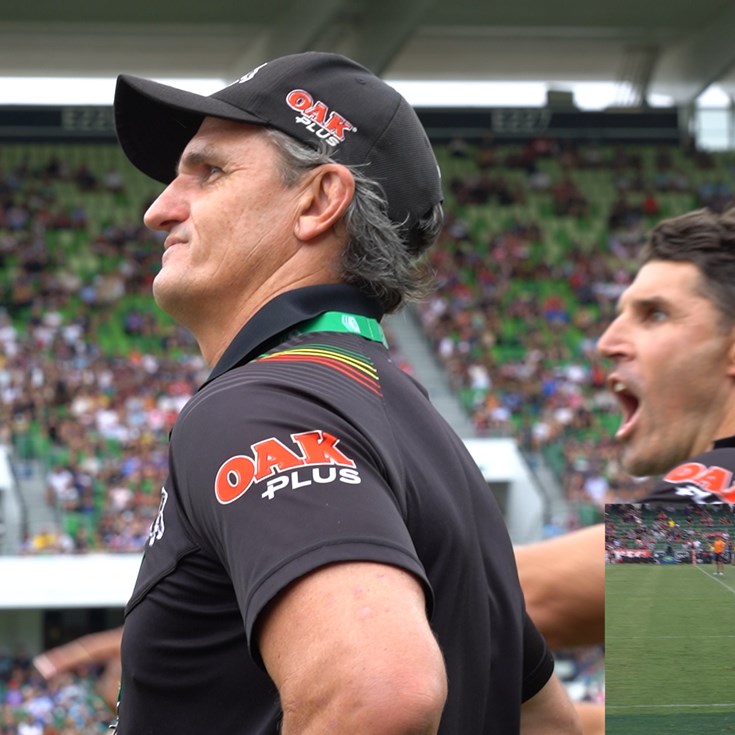