Kikau scored two first-half tries and set up a third, with a clever off-load as he was falling in a tackle for teammate D'Rhys Miller to score.

He was a clear and present danger on Fiji's left edge with his ability to get an arm free no matter how many tacklers are grabbing at him.

The Oceania Cup win was a little revenge for Fiji after they lost 32-17 to Samoa in the World Cup 9s two weeks ago, a contest in which a lot of the same personnel were involved.

The backbone of the win came in the opening 40 minutes with Fiji's five tries-to-one giving them a 30-6 lead.  By fulltime Fiji had added another three to make the scoreline more embarrassing for Samoa.

Off the back of 74 per cent possession, Fiji shot to an 18-0 lead after just 16 minutes. They looked to have put the game beyond reach, when interchange forward Joseph Ratuvakacereivalu scored Fiji's fourth try by burrowing through defenders under the sticks in the 23rd minute.

Samoa had an uphill battle and had only six sets with ball in hand, compared with Samoa's 14.

Perhaps tiring of seeing the black jerseys of Fiji Bati running past them – six line breaks to one at that stage – Samoa's Tim Lafai scored in the 26th minute and then converted it from out on the left edge to give Samoa is first points.

But Matt Parish's team had plenty of work to do in the second half to earn some respect after being down 24 points at the break.

‘Crying’ Kikau: How tears united Fiji ahead of Samoa smash-up

Samoa were first to score after half-time when Dragons centre Lafai, who didn't stop all afternoon, flicked a pass out to winger Jorge Taufua in the 50th minute.

But Fiji's response was quick, and almost identical, when centre Brayden Wiliame drew the defence and sent a one-armed pass to Isaac Lumelume. The scoreboard looked flush again with the Fijians leading 34-10.

Wiliame then scored himself, and three minutes later Kevin Naiqama crossed (66th minute), and the scoreboard was floating well out of reach at 44-10 as the Fijians ran riot.

Even halfback and goalkicker Brandon Wakeham suffering a leg injury midway through the second half didn't slow the Fijians down as fullback Siti Moceidreke converted Naiqama's try.

Late tries to Jorge Taufua (his second) and Ronaldo Mulitalo gave Samoa something to smile about.

Lafai gets Samoa on the board 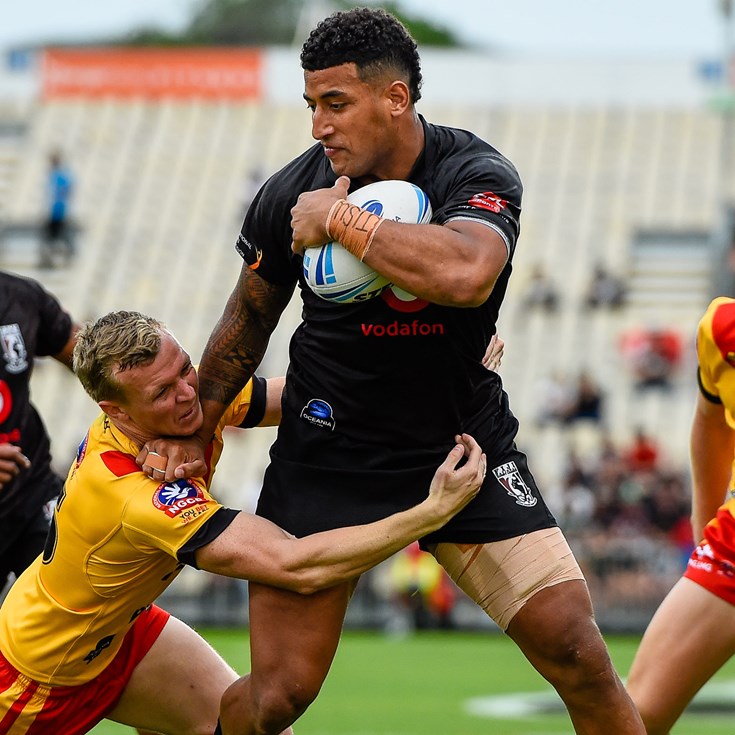 Luai opens the scoring for Samoa

Kikau slices through against Lebanon