The Jersey Flegg Panthers have finished inside the top four after running away 42-6 winners over Manly Sea Eagles at HE Laybutt Field on Sunday.

The victory sees the Panthers finish the regular season in third position on the competition ladder, meaning they will take on the Roosters in next week’s Qualifying Final.

Penrith lost the only meeting between the two sides earlier this year by 10 points.

It was a win made even more impressive by the fact that starting halves Daine Laurie and Adam Fearnley both failed to take part in the second half.

Laurie experienced hamstring tightness and his time on the bench was precautionary given he only recently returned from a hamstring injury. Panthers Jersey Flegg coach Ben Harden said he is confident Laurie will be fit to play next week.

He was less confident however about the chances of Fearnley, who also suffered a hamstring injury.

Laurie was excellent before going off with two tries to help the Panthers to a 24-0 half-time lead.

The opening try of the game came when Thomas Lofts crossed out wide. Laurie then steamed onto a loose ball to sprint away, a great sign of urgency with a top-four spot on the line.

Hooker Ryan Pritchard, who later shifted into the halves to cover for Laurie, then took the ball right up to the line and put Glenn McGrady through. Fearnley was backing up in support to score.

Laurie later put Terrell May, who filled in admirably in the halves in the second half, through a hole and was trailing back inside to race away for his second.

Justin Jones then spectacularly dove over in the corner to push the difference out to 24 at the break.

The Panthers returned to the field for the second half without Fearnley and Laurie. While the attack wasn’t as slick, they stood up in defence to hold Manly to just one try.

Keith Titmuss crashed over early for the Sea Eagles’ first of the afternoon but their joy proved short-lived as May nabbed his second try-assist when he put Ratu Nanovo over.

Brad Gaut then barged through with sheer power to score Penrith’s seventh of the match.

Nitoa Kairau iced the victory with a try in the dying moments off a smart offload from May. 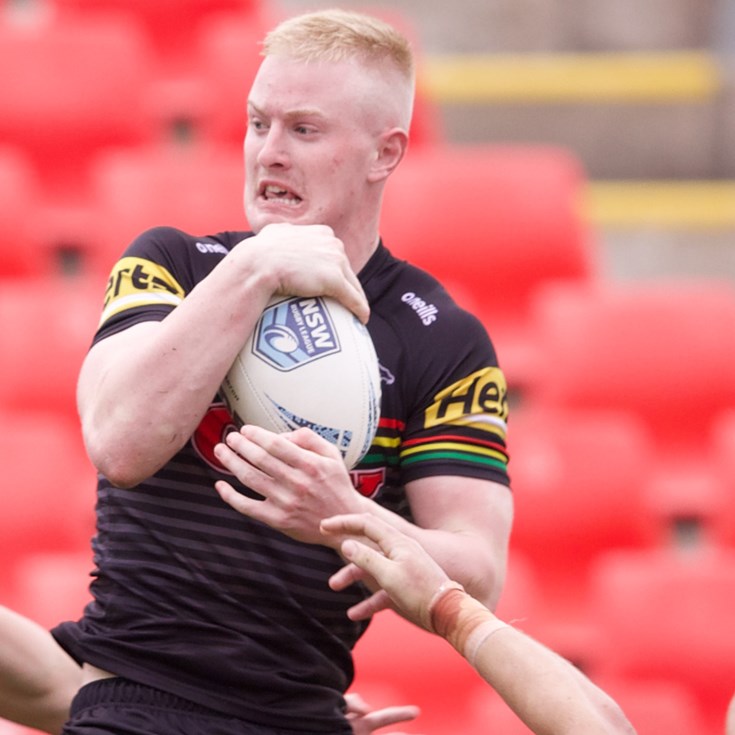