The Panthers’ finals hopes are in grave doubt after a 22-6 loss to Sydney Roosters at the SCG on Saturday.

Despite scoring the first try and showing great bravery against the reigning premiers, it just wasn’t to be for the Panthers as they suffered a third-consecutive loss which puts the top 8 further out of their reach.

A controversial Bunker decision at the end of the first half was costly, but the Panthers’ execution was ultimately not good enough to trouble the Roosters.

It was a positive start for the Panthers, as Viliame Kikau opened the scoring in the 4th minute.

A nice one-two between Nathan Cleary and Moses Leota created some space on the left edge, and Cleary went short for Kikau to barge over. The halfback added the extras to give the Panthers an early 6-0 lead.

The Panthers backed up with a strong defensive effort shortly after, surviving three straight sets on their line.

Their hard work was soon undone, as they conceded two quickfire tries on the back of an unnecessary penalty.

Sam Verrills jumped out of dummy half to open the Roosters’ account in the 15th minute, after Penrith’s goal-line defenders overread the play.

The Roosters went long-range after the kick-off, as an Angus Crichton line break paved the way for James Tedesco to slide over. Latrell Mitchell converted both tries, putting the hosts 12-6 ahead after 20 minutes.

A debatable Bunker decision denied the Panthers a crucial try on the stroke of halftime.

After being starved of opportunities, the Panthers had seemingly taken full advantage of a rare chance in the 38th minute when Nathan Cleary muscled over. However, the Bunker came up with a controversial obstruction ruling.

The Roosters rolled upfield and snapped two field goal attempts on the stroke of halftime, but the Panthers charged down both.

Debutant Billy Burns made his mark in the 45th minute with a great tackle on Nat Butcher to save a certain try.

There was no denying Latrell Mitchell however, who powered over on the short side in the 50th minute. He was unable to convert though, and it remained 16-6.

The Panthers were on the ropes again in the 54th minute, and Mitchell kicked the Roosters into a 12-point lead with a penalty goal.

Brent Naden pinned the ears back in the 59th minute after intercepting Luke Keary’s cross-field kick, but Butcher came across with a superb cover tackle.

It put the Panthers on the attack, but it amounted to nothing as Reagan Campbell-Gillard spilled the ball as he reached for the line.

After being pinned in their own half for ten minutes, the Panthers finally escaped thanks to James Maloney’s clever 40/20, but their goal-line attack was no match for the Roosters’ defence.

While the Panthers were wasteful with their chances, the Roosters executed on theirs. Daniel Tupou dotted down to put the finishing touch on the result, which leaves the Panthers in an ominous position heading into the final round of the regular season. 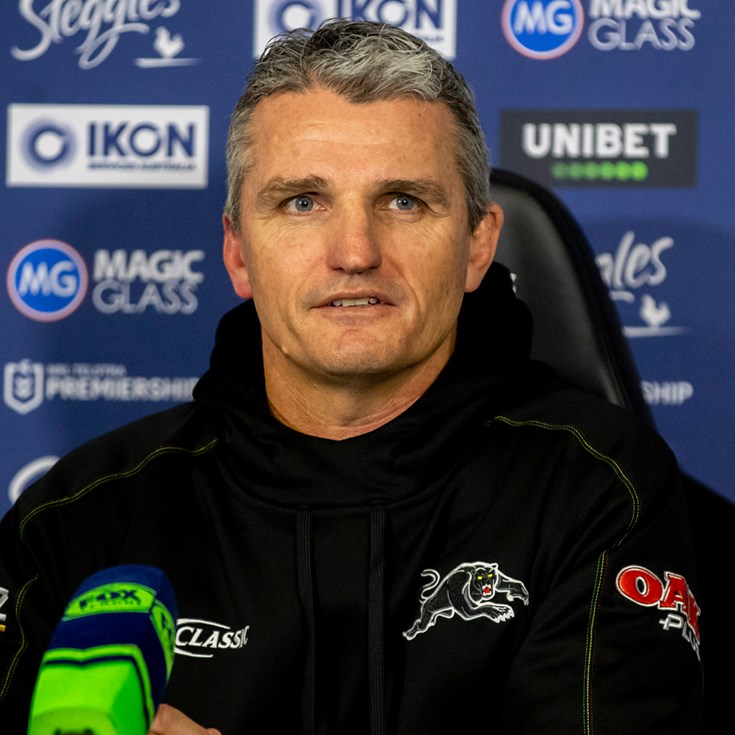