Former Panther Dallin Watene-Zelezniak has put a huge dent in his old club’s finals hopes with a standout performance in the Bulldogs’ upset 16-8 win at Bankwest Stadium on Saturday.

Watene-Zelezniak was facing his former club for the first time since gaining an immediate release in June and he was clearly up for a big one, laying on a try for Nick Meaney with a beautiful catch-and-pass and running for 150 metres.

In concert with centre Will Hopoate, who had one try assist, five tackle breaks and ran for 177 metres, DWZ helped the Bulldogs produce some of their best attack of the season to leave the Panthers' top-eight hopes teetering.

Apart from setting up a try, DWZ saved one as well when his desperate last-ditch tackle denied Liam Martin a four-pointer in the 58th minute with the Bulldogs clinging to a 10-8 lead.

Martin was arguably the best on ground for the Panthers, pulling off a bone-rattling hit on Watene-Zelezniak that brought a smile from his former team-mate.

Jack Cogger helped the Bulldogs to a 16-8 lead when he took the line on in the 62nd minute and stretched out to score.

The Panthers had their chances to narrow the gap and set up a thrilling finish but errors late killed off their chances.

Veteran prop Aiden Tolman celebrated his 200th game for the Bulldogs with 18 runs for 156 metres but he also spent 10 minutes in the sin bin for a professional in the 33rd minute.

Reimis Smith gets the opener

Tolman was ruled to have pulled Reagan Campbell-Gillard by the arm in a try-scoring opportunity but the 10-minute stint was well-handled by the Bulldogs, who conceded just two points in that period.

Penrith's up-and-down night was probably best summed up by centre Brent Naden, who butchered a simple try in the 28th minute after he had finished off a slick movement on the left edge to score just 15 minutes earlier.

Naden's blown try proved to be one of few chances the Panthers would have as the Bulldogs dug deep in defence to force 11 errors from a team that had plenty to play for.

Penrith's evening worsened before full-time with Maloney placed on report for an alleged trip on Jeremy Marshall-King.

The win moves the Bulldogs four points clear of the last-placed Titans while the shock loss was Penrith second on the trot after a seven-game winning streak.

Maloney keeps it alive for Naden 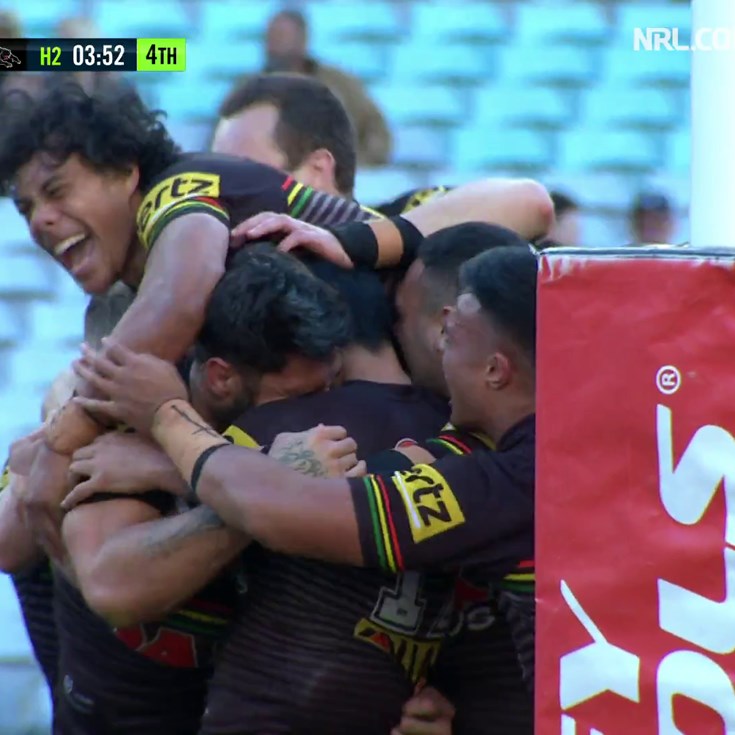 Tamou crosses for his first try of the season

Mansour joins the party for Penrith

Naden bends it back in for Capewell