The Panthers’ seven-game winning streak came to an end as they were beaten 30-18 by Canberra Raiders at Panthers Stadium on Sunday.

A strong crowd of 15,560 turned out for the exciting top 8 encounter, but it simply was not to be for the Panthers as plenty of close calls went Canberra’s way.

A try to James Tamou in the 70th minute gave the Panthers a fighting chance, but they were killed off soon after as John Bateman scored the Raiders’ sixth try of the afternoon.

The Panthers came flying out of the blocks and were first to score, as Brian To’o made it five tries in three games.

The winger dotted down in the corner after Nathan Cleary created a big overlap for Dean Whare to exploit.

Cleary was unable to add the extras from the sideline, however.

After the Panthers failed to take advantage of three-straight sets on the Raiders line, Canberra went up the other end and opened their account with their first attack.

Josh Hodgson went short to Josh Papalii out of dummy half, and Jarrod Croker’s conversion nudged the Raiders ahead 6-4 after 16 minutes.

A line break by Dylan Edwards put the Panthers back on the front foot, and Nathan Cleary went close but was cut down short of the line and lost control.

The Raiders marched back upfield where Dean Whare was sent to the sin bin for a professional foul in the 21st minute.

They immediately scored down Penrith’s undermanned right edge through Elliott Whitehead, and Croker extended the Raiders’ lead to 12-4.

Jarome Luai was brought on to defend at right centre afterwards and did a commendable job, as the Panthers survived the remainder of Whare’s absence.

Tensions boiled over late in the first half after Corey Horsburgh lashed out. The Raiders then gave away a penalty on their line with seconds remaining, forcing the Panthers to settle for two points.

James Maloney and Nathan Cleary combined to save a certain try early in the second half, but there was no denying the Raiders in the 45th minute.

They shifted it wide where Michael Oldfield put a great kick back infield for Aidan Sezer, and Croker knocked over the goal for 18-6.

The Panthers responded in outstanding fashion minutes later, however.

James Maloney’s chip kick sat up for James Fisher-Harris, who found Moses Leota flying through on his inside, and the prop made it to the line with defenders closing in.

Nathan Cleary’s conversion trimmed the margin down to six points, but the Raiders hit back with two quickfire tries.

After the Panthers failed to defuse a cross-field kick, Charnze Nicoll-Klokstad pounced on the loose ball in the 53rd minute.

Then, a harsh knock on call by Ashley Klein handed the Raiders another attacking opportunity, and they capitalised as Jordan Rapana planted it down in the corner.

Croker failed to convert, leaving the Panthers twenty minutes to come back from 26-12 down.

After a prolonged period attacking the Raiders’ line, the Panthers finally broke through in the 70th minute when Wayde Egan sent captain James Tamou through a gap in the goal line defence.

Cleary converted to trim the margin down to eight points with 10 minutes remaining, but the Raiders put the game in the 74th minute.

A short goal line dropout by James Maloney hit the deck and bounced up for John Bateman, who strolled over to seal the match.

The Panthers will look to return to winning ways when they face the Bulldogs at Bankwest Stadium on Saturday. 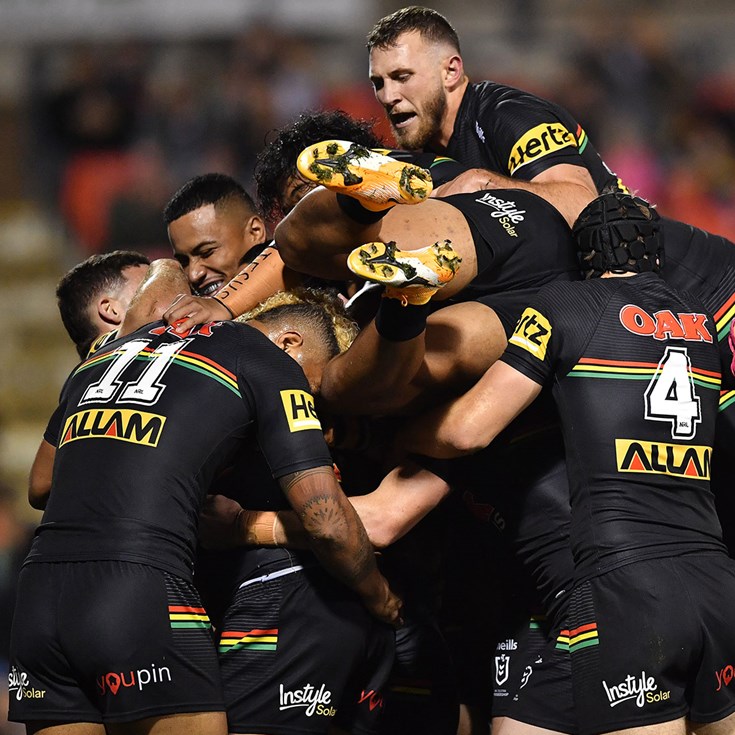