Nathan Cleary expects his position in the NSW team to come under scrutiny after Wednesday night's 18-14 loss in the opening Origin game of 2019 but hopes he and halves partner Cody Walker will be given a chance to help level the series in Perth.

Cleary admitted he needed to take greater control of the game in the second half but also revealed the confusion within the team after Walker was replaced by bench utility Jack Wighton in the 56th minute.

Wighton had not trained at five-eighth during the lead-up to his Origin debut, with NSW coach Brad Fittler planning to use him as a back-rower or centre but with the Maroons dominating the second half he felt the need to make the dramatic change.

"It's not ideal when you lose but I could have done a lot more I feel. That hurts after the game but in saying that, I tried my hardest and unfortunately we just didn't come through," Cleary said.

"The scrutiny always comes on the No.7, especially in Origin, so I'm prepared for it."

It was the first time Cleary had played with Walker and they were paired together after injuries to Sydney Roosters five-eighth Luke Keary, South Sydney halfback Adam Reynolds and Newcastle playmaker Mitchell Pearce on the eve of the NSW team's selection.

After dropping out-of-form Penrith five-eighth James Maloney, Fittler stuck by Cleary and chose Walker after his stunning form for South Sydney this season but the criticism of their pairing was that neither are organising playmakers for their Telstra Premiership teams.

Pearce and Maloney are now expected to be considered for Origin II at Optus Stadium on June 23 but Cleary hopes he and Walker receive another chance.

"I think the best way to learn from each other is to play with each other. I feel like I've learned a fair bit about Cody," Cleary said.

"Unfortunately he went off in that second half. I don't know what happened to him. I didn't even know Cody was off until I saw Jack jump in. That was a bit of a mix-up but you've got to deal with that sort of stuff.

"It's the first time we've played together and it's building. Hopefully we can improve on the next couple of weeks."

With Walker on the left side of the NSW ruck inside Boyd Cordner, Latrell Mitchell and Josh Addo-Carr and Cleary on the right, both found it hard to get involved as the Blues attack was focused through the middle of the field.

Hooker Damien Cook made 115 metres from 13 dummy-half runs, while most of the 254 metres fullback James Tedesco ran with the ball began around the ruck, where NSW props David Klemmer and Paul Vaughan were making easy metres in the first half.

"The way the game played out we [Walker and Cleary] were split on either side," Cleary said.

"Cooky and Teddy were just roaming that middle. Cody had some really good touches at the end as we came back, but unfortunately we just fell a bit short."

Walker had five runs totalling 43 metres, while Cleary ran the ball 11 times and made 61 metres.

Cleary was responsible for most of NSW's kicking and made 335 metres from 12 kicks, including two bombs. With the Blues struggling to get out of their own end for much of the second half he often had to kick from inside his own half.

Cook kicked six times from dummy-half and forced Queensland's only goal-line drop-out, while Walker had one clearing kick and two grubbers.

After returning to the game for the last 10 minutes Walker combined with Rabbitohs team-mate Cameron Murray to put Trbojevic over in the 75th minute and give NSW hope of snatching a late win.

Latrell admits he wasn't at his best

However, the Blues needed to make more of their first half dominance and after leading 8-0 at halftime they completed just 13 of 17 sets of possession in the second term to put themselves under enormous pressure.

"We were pretty happy with the 8-0 lead. It would have been nice to be a bit more up but I thought we were in a really commanding position and we had a good completion rate," Cleary said.

"In the second half we made a few too many errors and came up with poor defensive plays. We've got to play better. There were a few moments in that game where we slipped off a bit and Queensland made the most of it." 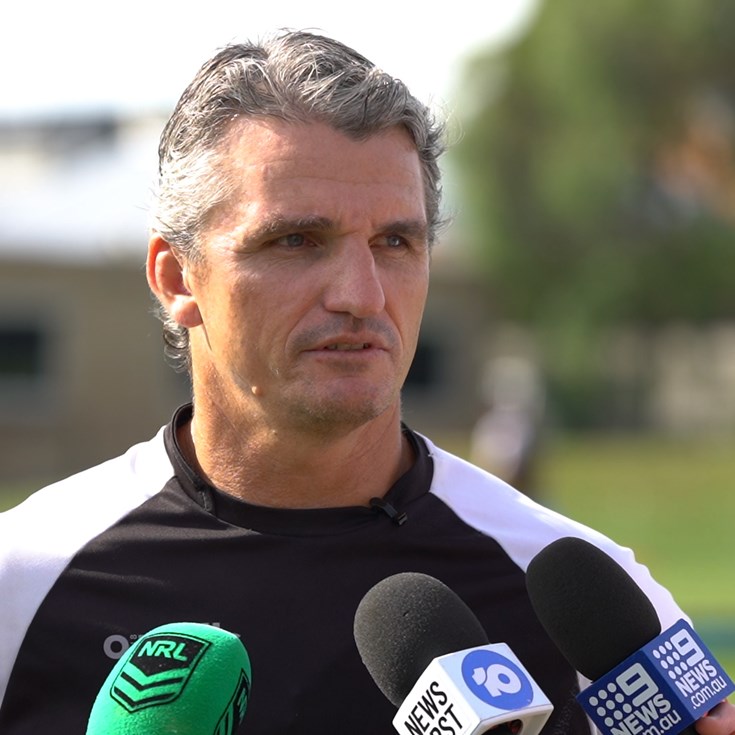 Cleary admits spots are on the line in Bega

Heroes and humility on the South Coast