The Panthers were decimated by injuries to key players in a 30-12 loss to Canberra Raiders at McDonalds Park on Saturday.

Viliame Kikau (leg), Isaah Yeo (shoulder) and Malakai Watene-Zelezniak (ribs) all failed to make it to the fulltime siren on a horror afternoon in Wagga Wagga, as the Panthers sunk to a fourth-consecutive loss.

The Panthers had their chances in the first half, especially when Charnze Nicoll-Klokstad was sin binned in the 18th minute, but they did not capitalise. James Tamou’s extraordinary solo try in the 76th minute was a rare highlight, however.

After an enthusiastic start, the Panthers shot themselves in the foot with a last-tackle penalty and Canberra went on to open the scoring. Sam Williams’ kick was pounced on by Michael Oldfield, and Jarrod Croker converted to give the Raiders a 6-0 lead after 10 minutes.

Waqa Blake put the Panthers on the attack in the 18th minute, flying high to defuse a bomb before racing up to the halfway line. The Raiders tried to suppress the momentum by conceding penalties, but it backfired as Charnze Nicoll-Klokstad was sin binned.

A game-ending shoulder injury to Isaah Yeo in the 20th minute halted the Panthers’ attacking raid however, and the Raiders successfully defended their line.

Another penalty by the Panthers delivered the Raiders field position and, despite being a man down, doubled their lead as Jack Wighton latched onto Elliott Whitehead’s offload in the 26th minute.

After surviving the absence of Nicoll-Klokstad, the Raiders hit a 14-0 lead in the 35th minute after Maloney’s short dropout went out on the full.

Caleb Aekins’ line break in the 39th minute gave the Panthers a chance to claw themselves back into the contest, but the Raiders scrambled in defence maintain their advantage.

The Panthers again dominated the early stages and were able to capitalise this time around. Wayde Egan’s grubber took a deflection and sat up for Maloney, who sent Nathan Cleary through a hole in the defence. The halfback added the extras, closing the gap to 14-6 after 49 minutes.

The momentum came to a cruel, abrupt stop, as Viliame Kikau was assisted off the field with a knee injury that left him in severe pain.

His replacement, Liam Martin, came close to scoring off a brilliant Nathan Cleary chip in the 52nd minute, but left the ball behind.

Martin and James Maloney found themselves on report for a dangerous tackle shortly afterwards, and the Raiders then marched upfield where Nicoll-Klokstad burrowed over. Croker’s conversion made it 20-6 after 55 minutes.

The Panthers copped a double blow in the 62nd minute, as Malakai Watene-Zelezniak succumbed to a rib injury while Croker knocked over a penalty goal to stretch the Raiders’ lead to 16 points.

In the 72nd minute, Hudson Young slipped through some weak Panthers goal line defence, making it 28-6.

From the short kick-off, James Tamou scored a sensational solo try. The captain got the ball on the 40-metre line and carved through a number of Raiders defenders to touch down, and Maloney converted to reduce the deficit.

Tamou’s heroics breathed life into the Panthers, and they almost scored another brilliant try in the 76th minute which would have given them a sniff. Egan’s chip-and-chase set in motion a brilliant passage of play which culminated in Sione Katoa touching down, but Tim Grant was caught offside.

The Raiders wrapped up the win on the stroke of full-time as Croker kicked a third penalty goal of the afternoon. 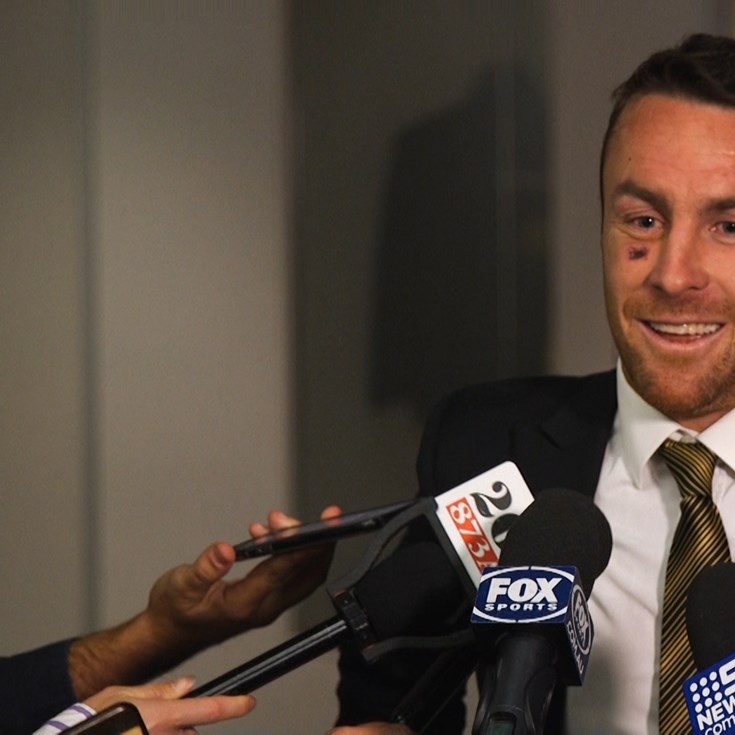