The Blore brothers grew up under the same roof, but it’s taken a Trans-Tasman Test for them to finally play each other on the footy field.

Shawn (18) and Dean (20) have risen through the Penrith ranks together and each has ticked off their fair share of representative honours at state and international level. They played the Jersey Flegg Cup Grand Final together last month for the Panthers; Shawn led from the front in the forwards while Dean steered the side around from five-eighth.

Never have they lined up against each other on the field. That is until this Saturday, but it’s no neighbourhood park game which seems likely given they’ve lived in each other’s pockets since the turn of the millennium.

The brothers will play each other in the Junior Kangaroos versus Junior Kiwis game, with Shawn representing Australia and Dean representing New Zealand.

“I’m more nervous than anything, more so because of my brother,” Shawn says to NSWRL.com.au.

“If he throws a dummy on me or tries to whack me I’ll be pretty upset about it and I’ll try not to let that happen.

“I’ve only ever played with him and that makes it even more nerve-racking because we know each others games so well, we’ll see what happens on the weekend.”

The biggest question isn’t which brother will get bragging rights. It’s which country the extended Blore family are going to support.

As the news of Dean’s selection had the family ready to settle in and support the elder sibling, Shawn was informed of his selection.

If he throws a dummy on me or tries to whack me I’ll be pretty upset about it and I’ll try not to let that happen.

The foundations of the metaphorical fence would need to be strong considering the Blore family – like any good family – will be sitting on it.

“When Dean got the call that he made the Junior Kiwis side, I was ecstatic for him and so proud of him and we were expecting to just watch him do his thing,” Blore explains.

“I ended up getting the call from the coach here and it all came as a big shock, straight away I showed Dean and we both went home asked our parents straight away who they were cheering for.

“They’re all sitting on the fence about it and hoping for a draw, [it’s the] best-case scenario for them.”

For Shawn, Junior Kangaroos selection caps off what has been a truly incredible season.

He won both the SG Ball Premiership and National Championships as captain with the Panthers, captained the NSW Under-18s Origin team to a come-from-behind victory, made the Jersey Flegg Grand Final, and won the NSW Under-18s Player of the Year.

Junior Kangaroos selection is a reward for what he’s been able to do on and off the field, particularly because he’s playing two years young, which is remarkable as a forward. He does admit, however, that the news came as a big shock.

“After the Grand Final I was honestly just thinking that I was going to have a big rest before pre season,” Blore says.

“When I went to the season review with the Panthers Ben Harden the coach came up to me and gave me the news and when he told me it was more of a shocked silence.

“I just kind of stared at him and thought ‘are you kidding, are you having a joke with me’ and he showed me the letter, I’m super grateful.”

Mark O’Meley was Blore’s NSW Under-18s coach this year, and he is on the coaching staff for the Junior Kangaroos.

He, along with coach Neil Henry, are ensuring the players receive access to the best facilities given they’re playing at the highest level for their age group.

Blore - whose professionalism in preparing himself for games and how he presents himself is second to none – is blown away about how professional the Australian camp is.

“The camp has been unreal, I’ve never been a part of anything like it,” Blore says.

“How well they look after you, we’re getting five star treatment for free and I’m trying to make the most of it with the coaching staff we have here with Mark O’Meley and Neil Henry.

“One’s a former NRL coach and one’s played Origin before, so I’m just trying to soak it all in as I can and make the most of it while I’m here.”

For any Australian or New Zealand growing up wanting to represent their country, the thought of pulling on the jersey is where the dream begins.

The Kangaroos’ jersey presentation is tomorrow night on the eve of the clash, and just the thought of receiving it almost had Blore lost for words.

“I haven’t seen the jersey yet but I get tingles thinking about it,” Blore says.

“When we get the jersey presentation tomorrow, I don’t know what I’m going to do.

“I’ll probably just end up staring at it for a while and realising the weight it has, such great history with the Junior Kangaroos with the players coming through.”

“Latrell Mitchell for example just look at him now it’s pretty crazy to think about.”

The Junior Kangaroos v Junior Kiwis game will be televised on FOX League at 1.05pm AEDT and played at Mt Smart Stadium. 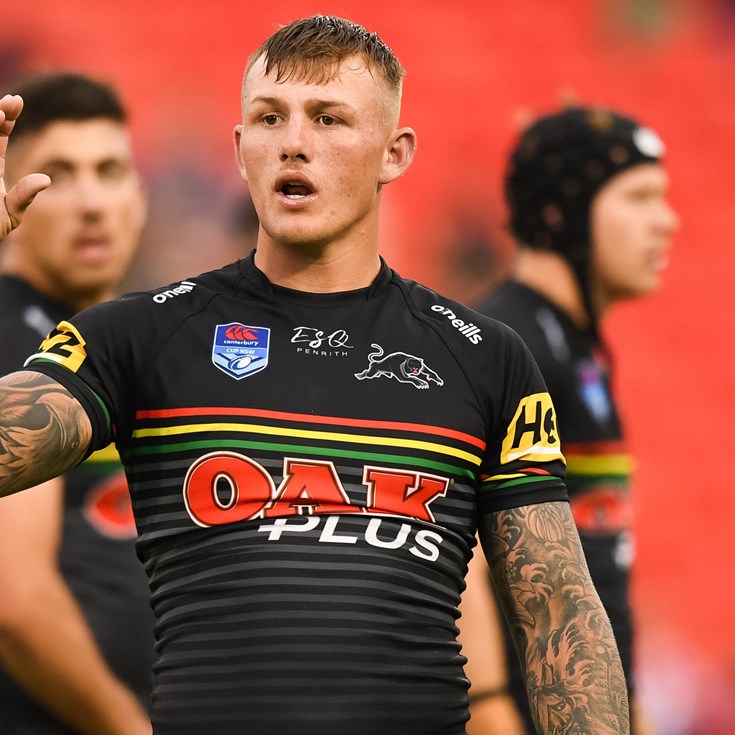