A persistent Panthers outfit snatched a 40-31 comeback victory over Canberra Raiders in front of 12,915 spectators at Panthers Stadium on Sunday.

After trailing by 14 points at halftime, tries in the final ten minutes by Dallin Watene-Zelezniak, Josh Mansour and James Maloney secured yet another comeback victory for the Panthers.

The Panthers won a penalty after a Viliame Kikau line break inside the opening 60 seconds, and then opened the scoring when James Tamou slipped through some weak goal-line defence. Nathan Cleary converted to hand the Panthers a 6-0 lead after just 3 minutes.

Kikau pulled down Josh Papalii short of the line in the 5th minute, but it merely delayed the Raiders' opener. After a penalty, Joey Leilua took a quick tap and charged through the unsuspecting defence, and Sam Williams converted to draw the Raiders level.

The Raiders then edged ahead in the 13th minute through a penalty goal by Williams.

After surviving another attacking raid by the Raiders, the Panthers took back the lead in the 20th minute when Tyrone Peachey swept around the back and sliced through a gap in the backpedalling defence. Nathan Cleary converted from out wide to make it 12-8.

In the 22nd minute, Dallin Watene-Zelezniak chased down a grubber headed for touch and flicked the football back into the field of play for Dean Whare to cross the line. However, the celebrations were cut short by a forward pass ruling that did not sit well with the Panthers faithful.

After Peachey failed to defuse a towering bomb, the Raiders hit the lead in the 27th minute when Elliott Whitehead charged over and Williams converted.

The Raiders extended their lead in eye-catching fashion when Jordan Rapana latched onto a low-hanging, cross-field kick by Sezer and offloaded to Leilua, who went over for his second try. Williams added the extras to put the Raiders ahead 20-12 after 36 minutes.

The Panthers looked to peg one back in the dying stages of the first half, but instead found themselves further behind when Rapana got his hands on a loose ball and streaked away down the wing to score. Williams landed the conversion to hand the Raiders a 14-point lead heading into the sheds.

The Raiders were on course for another try just seconds into the second stanza after a breakaway on the right flank, but Rapana's final pass to Cotric was forward and the Panthers were let off the hook.

The Panthers then clawed their way back into the contest when Corey Harawira-Naera went short to Dean Whare, who ran a good line and fooled Cotric with a change of direction to slide over. Cleary knocked over the conversion to narrow the gap to eight points after 48 minutes.

A 49th-minute Nathan Cleary 40/20 allowed the Panthers to set up camp on the opposition goal line, but despite back-to-back penalties the attack fizzled out as Sione Katoa threw an intercept.

The Raiders produced a dangerous counter attack, however their biggest try-scoring opportunity amounted to nothing in the 51st minute as Peachey reeled in a runaway Cotric short of the line.

The Raiders came up trumps on their next opportunity as Rapana darted from dummy half and went wide to an unmarked Leilua, who strolled over for his hat-trick. Williams missed the conversion, and the score remained 30-18 after 57 minutes.

The Panthers quickly responded however, as Peachey fooled Blake Austin with a dummy to grab his second try in the 59th minute. Cleary made no mistake with the boot and made it a six-point ballgame.

However, Williams gave the Raiders some breathing space in the 67th minute with a field goal that gave the visitors a 31-24 cushion.

The Panthers continued to persist however, and set up a grandstand finish in the 70th minute when Peachey swept around the back and threw a cut-out pass to Dallin Watene-Zelezniak, who dotted down in the corner. Cleary came up with an uncharacteristic miss, and the difference remained three points.

But as they have done so many times this season, the Panthers stole the lead late on as Maloney sent Josh Mansour away down the left touchline, and the winger went around Cotric with a dummy to cross the line. Cleary's conversion put the Panthers ahead 34-31 with 6 minutes remaining.

Match-winner Mansour was unable to finish the match however, suffering a nasty head cut after being clipped by the elbow of Rapana in the 78th minute.

The incident drew a penalty, which allowed Maloney to put the icing on the victory by taking on the line and blitzing through some weak Raiders defence. Cleary booted the conversion to wrap the Panthers' latest, against-the-odds comeback victory. 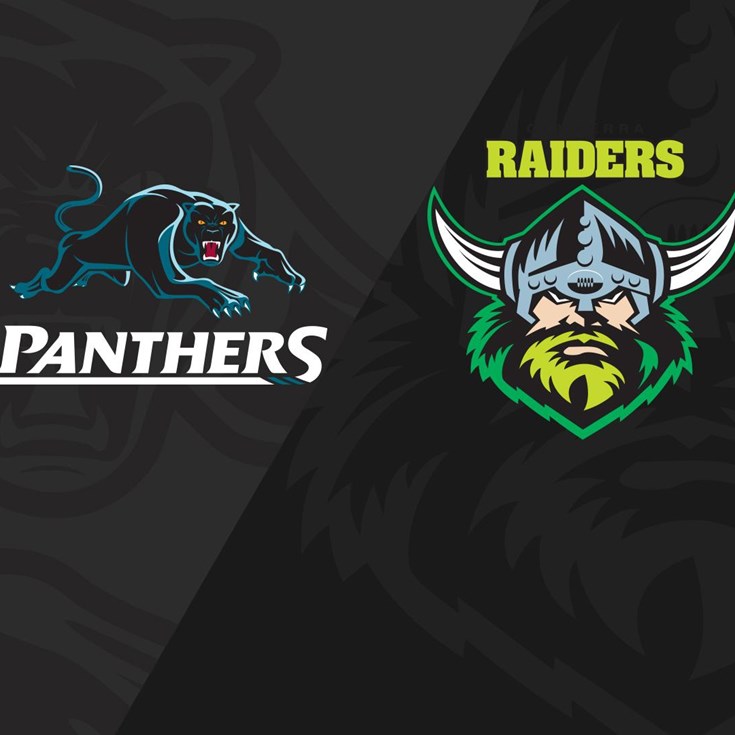 OAK Plus Gallery: Round 21

Hertz Plays of the Week: Round 20