A scrappy Panthers outfit fell to an 18-10 loss to Manly Warringah Sea Eagles at Panthers Stadium on Saturday afternoon.

The defeat was further soured by Viliame Kikau re-injuring the knee that has sidelined him for the past three weeks.

After the Sea Eagles failed to compete either of their first two sets, James Maloney handed the Panthers an early lead with a 5th-minute penalty goal.

The Sea Eagles then scored the first try in the 11th minute when Tom Trbojevic turned the football inside to Joel Thompson, who powered through some staggered defence and over the try line. Daly Cherry-Evans converted to put the Sea Eagles ahead 6-2.

The Panthers came close to a response in the 14th minute when Dallin Watene-Zelezniak floated the football to Tyrone Phillips, but the winger was wrapped up and the Sea Eagles retained their lead.

Matthew Wright appealed for the Sea Eagles second try in the 16th minute when he picked up the scraps of a bouncing Cherry-Evans bomb, but the winger knocked on in the aerial contest.

Thompson came close to bagging a double in the 32nd minute when he poked his nose through the defence, but Nathan Cleary and Moses Leota combined to cut down the second rower short of the line.

After surviving an attacking assault by the Sea Eagles, the Panthers equalised when Dallin Watene-Zelezniak charged onto Sione Katoa's deceptive inside ball to touch down. Maloney edged the Panthers ahead with the conversion in the 36th minute.

The Sea Eagles seemingly scored on the stroke of halftime when Brad Parker touched down at the end of a backline shift, but Maloney was obstructed and the Panthers retained their lead heading into the sheds.

An error from the kick-off gifted the Sea Eagles an opportunity which did not go to waste as Wright crossed in the corner. Trent Hodkinson's conversion attempt drifted wide, and the score remained 10-8 in Manly's favour after 43 minutes.

The Sea Eagles spent an extended period camped in the Panthers red zone, but they failed to capitalise as Kelepi Tanginoa spilled a short ball by Hodkinson in the 49th minute.

Milestone man Tyrone Peachey claimed a try in the 54th minute when he pounced on Nathan Cleary's grubber to the in-goal, but the Bunker confirmed Gerard Sutton's double knock-on ruling.

Dean Whare was held up short of the try line by offside Sea Eagles defenders in the 57th minute, allowing Maloney to slot a penalty goal and lock the scores at 10 apiece.

Cleary was sent to the sin bin in the 65th minute after the Bunker deemed the halfback pushed Cherry-Evans as he chased through a grubber to the in goal. Hodkinson booted a penalty goal to bump the Sea Eagles ahead 12-10.

The Sea Eagles capitalised on the overlap as Hodkinson strolled over off of a Jake Trbojevic offload. He added the extras to hand the Sea Eagles an eight-point lead with 9 minutes remaining.

The Panthers were dealt another major setback in the 74th minute as Viliame Kikau hobbled off the field with a knee injury.

Cleary's return from the sin bin was not enough to help spark a late comeback as the Panthers succumbed to an eight-point loss. 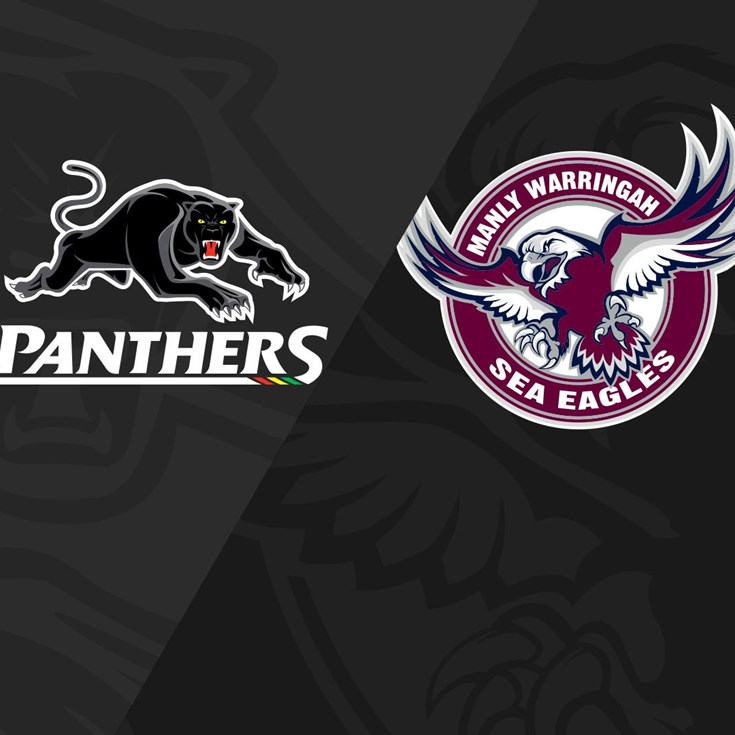 Miraculous Martin taps it back for Crichton