The Panthers retained their spot atop the NRL table on Friday night with a dramatic 23-22 win over the Canberra Raiders at GIO Stadium.

After trailing by six points with less than five minutes remaining, the Panthers dramatically stole the victory as Dean Whare scored a try, James Maloney kicked a sideline conversion to equalise and Nathan Cleary slotted the match-winning field goal.

The Panthers opened the scoring in the 3rd minute when James Maloney chipped over the Raiders defence before toeing through to the left wing. The Raiders failed to clean up at the back and Tyrone Peachey scooped up the loose ball to slide over. Maloney's sideline conversion sailed wide, and the score remained 4-0.

When Aidan Sezer was penalised for escorting Dallin Watene-Zelezniak off the high ball in the 7th minute, Maloney booted a penalty goal to open up a 6-0 lead.

Poor ball handling by the Raiders gifted the Panthers great field position in the 10th minute, and Maloney again took the points on offer after Shannon Boyd was pinged for a late hit on Nathan Cleary.

The Raiders marched upfield from a seven-tackle set and capitalised on their first attacking opportunity as Nick Cotric dived over at the end of a set piece. Jarrod Croker converted to narrow the margin to 8-6 after 15 minutes.

The Raiders had try-scoring opportunities in the 20th and 22nd minute, but the Panthers were given back-to-back reprieves as Cotric and Jack Wighton both fumbled the football close to the try line.

The Panthers were then reduced to 12 men in the 34th minute when referee Henry Perenara sent Kaide Ellis to the sin bin for repeated offences.

The Raiders looked to capitalise on the one-man advantage with a backline shift to Cotric, but the Panthers scrambled desperately and Christian Crichton barreled his opposite winger into touch.

A frantic last tackle option by the Raiders resulted in Jordan Rapana landing a 40/20, which teed up Croker to kick a penalty goal and lock the scores at 8-all after 38 minutes.

The Panthers edged back ahead in the 43rd minute through a Maloney penalty goal after the Raiders were caught offside on the goal line.

However the Raiders hit the front in the 49th minute when Rapana picked up the scraps of an alleged Peachey knock on and scurried away to score, despite suggestions of a knock on by Blake Austin. Croker added the conversion to take the Raiders out to a 14-10 lead.

The Raiders extended their lead in the 62nd minute when Josh Papalii got an offload away to Elliott Whitehead, who went over in the corner. Croker landed the goal to push the Raiders ahead by 10 points.

A 65th-minute line break by Maloney put the Raiders on the back foot, and the Panthers capitalised with a backline movement that allowed Peachey to slice through and bag a double. Maloney converted to close the gap to 20-16.

However Croker kicked a penalty goal in the 69th minute to make the difference a converted try.

Siliva Havili looked to widen the gap to seven points when he attempted a field goal in the 74th minute, but poor connection saw the football trickle dead.

The Panthers charged upfield and scored a dramatic try in the 76th minute as a one-two between Peachey and James Tamou resulted in an overlap on the right, and the football made its way to Dean Whare who touched down in the corner. Maloney came up with a clutch play, nailing the conversion from the sideline to level the score at 22-all.

After the Raiders made an error deep inside their own half, Nathan Cleary coolly potted a field goal to put the Panthers ahead with less than 2 minutes remaining.

The Raiders pushed for late points to add another twist to the dramatic match, but the Panthers defence held firm to claim an astonishing victory. 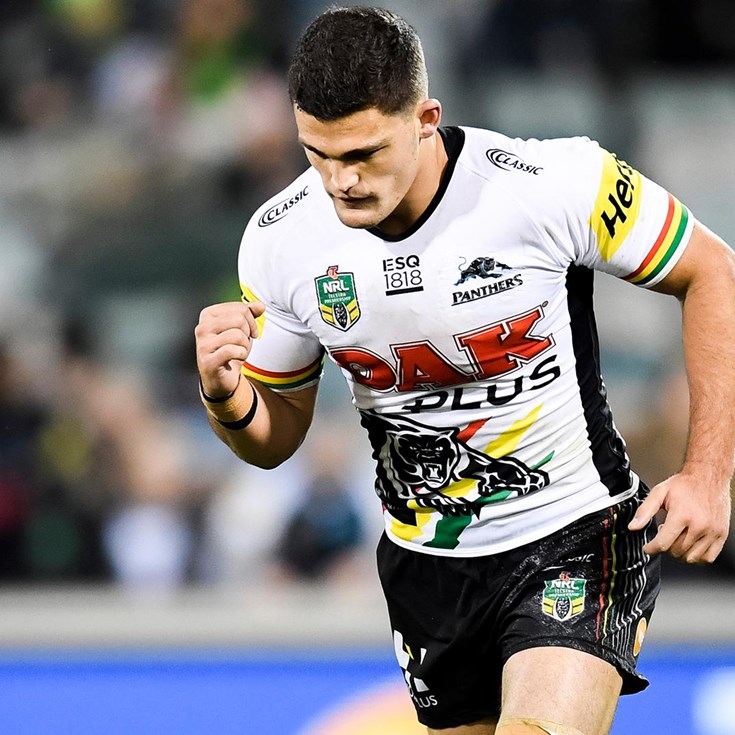 OAK Plus Gallery: Round 14