The North Queensland Cowboys have put their season back on track with a 26-20 win over Penrith at Carrington Park in Bathurst on Friday.

After eight weeks of inconsistency, the Cowboys finally clicked into gear to race out to a 20-0 lead but they were dragged back in typical fashion by the Panthers, who lost Trent Merrin with a fractured finger in the warm-up in another cruel blow for the club.

Merrin will require surgery and is expected to miss up to four weeks.

With all eyes on the combination of Thurston and Michael Morgan in recent weeks, it was Morgan who provided the first try of the night when he ran a direct line off Jake Granville in the 14th minute for a 6-0 Cowboys lead.

North Queensland continued to target the Panthers' left-edge defence with James Maloney coming up with five missed tackles in the opening quarter of the game as Ben Hampton turned him inside out to stroll over the line in the 18th minute.

A penalty goal to Thurston had Paul Green's side racing out to 14-0.

Things got worse for the Panthers in the 31st minute with Dallin Watene-Zelezniak sent to the sin bin for striking Cowboys winger Kyle Feldt after the Panthers fullback was ruled to have taken out Lachlan Coote in the air before the teams came together in retaliation.

North Queensland took advantage of the extra man in attack with Thurston sending Gavin Cooper over close to the line in simple fashion.

Penrith struck back on the stroke of half-time with some flamboyant play with Isaah Yeo keeping the ball alive with a flick pass for Tyrone Phillips, who beat three Cowboys defenders to go over in the corner.

The sin bin again played a big part in the second half when Shaun Fensom was sent for 10 minutes after impeding Tyrone Peachey after a quick tap had been taken.

With Fensom off the field the Panthers struck twice through captain Peter Wallace, who bagged the first double of his 239-game career.

First he burrowed his way under the Cowboys defensive line to narrow the lead to 10. Two minutes later he was on hand to swoop on a ball that had been tapped down by Watene-Zelezniak from a Maloney kick and the Panthers were charging.

Wallace was in the action the following set when he was ruled to have collected Lachlan Coote high in a tackle and the Cowboys responded to regain a eight-point advantage with Justin O'Neill tapping the a kick back into the hands of Thurston to score his first four-pointer of the season.

The see-sawing second half continued five minutes later with Sione Katoa breaking through the middle of the field to find Watene-Zelezniak in support. The fullback was pulled down in a classic cover tackle by Hampton but the ball was then spun to James Maloney, who provided the cross-field kick out wide to send an unmarked Phillips over for a double.

A high tackle by Peachey on Cowboys winger Antonio Winterstein gave Thurston the chance to stretch the lead to 26-20 with a penalty goal.

Jason Taumalolo ran for more than 200 metres in his best game of the season and Lachlan Coote also starred for the Cowboys, who will look to continue their revival against Wests Tigers at Leichhardt Oval next Thursday.

News & Notes: Trent Merrin suffered a fractured finger in the warm-up and had surgery in Orange on Friday night ... Johnathan Thurston scored his first try of the 2018 season ... Dallin Watene-Zelezniak was sent to the sin bin for striking Kyle Feldt in retaliation ... Peter Wallace played his 100th club game for the Panthers ... A record crowd of 10,289 was in attendance for the game ... Cowboys play Wests Tigers next Thursday at Leichhardt Oval ... Panthers face the Knights in Newcastle next Friday. 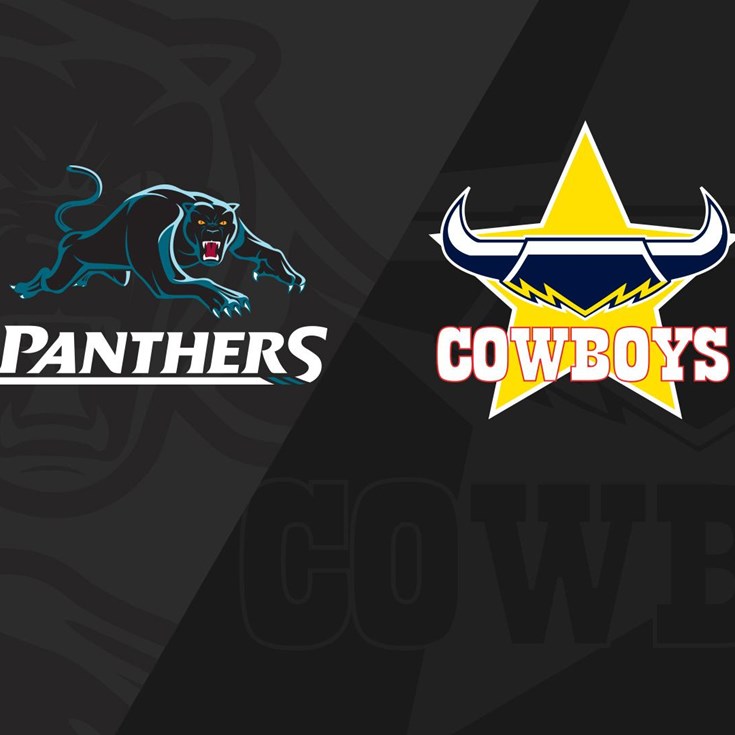