An impressive performance from Newtown halfback Kyle Flanagan and a double to Aaron Gray saw the Jets leave Panthers Stadium with a 36-12 victory over the ISP Panthers.

Too many errors in the first half gifted the Jets an unassailable 22-point lead at the break.

It took just 11minutes for the first Jets to cross for their first of six tries. Reubenn Rennie found Matt Evan’s unmarked on the left wing who strolled over out wide. Kyle Flanagan nailed the conversion to give the Jets an early 6-0 lead.

A scrappy period of the game ensued as both teams made errors in attacking areas.

It took until the 25th minute of play for Bessie Aufaga-Toomaga to extend the lead as the Jets targeted the Panthers left edge to get their second of the afternoon. Flanagan hit the touchline conversion sweetly to make it 12-0.

Aaron Gray pounced on a William Kennedy grubber in the 32nd minute of play with Flanagan adding the extras.

Quick hands following a Blayke Brailey tackle break led to Aaron Gray picking up his second in a matter of minutes. Flanagan’s attempted conversion was waved away, giving the Jets a 22-0 lead with three minutes to play in the half.

The Panthers needed to be first to score in the second forty and it was Chad O’Donnell who answered the call. Matt Evans put down a bomb close to the Jets line and O’Donnell pounced on the loose ball and used his strength to beat the oncoming defence. Adam Keighran slotted over his first conversion attempt to reduce the margin to 22-6.

The momentum swung back to the Jets when Scott Sorensen got a great offload away to Rennie, who stepped Caleb Aekins on his way to the line. Flanagan added the extras to give the Jets a 28-6 lead with under half an hour to play.

The Panthers received back-to-back penalties before Sione Katoa dribbled the ball into the in-goal which was gathered by a flying Tom Eisenhuth. Keighran’s conversion saw the Panthers trail 28-12 with 23 minutes to play.

Henry Seumanu was put on report for a strong tackle on Jets five-eighth Jack Williams which gifted Kyle Flanagan with an easy penalty goal. The Jets lead moved to 18 with 12 minutes remaining.

Chad O’Donnell chased through a Jarome Luai grubber in the 74th minute however he was ruled to have knocked on attempting to ground the ball.

With three minutes remaining Billy Magoulis steamed onto a great ball from Flanagan to cross out wide. Flanagan sealed victory for the Jets with his sixth conversion of the afternoon as Newtown left the foot of the mountains win a 24-point victory. 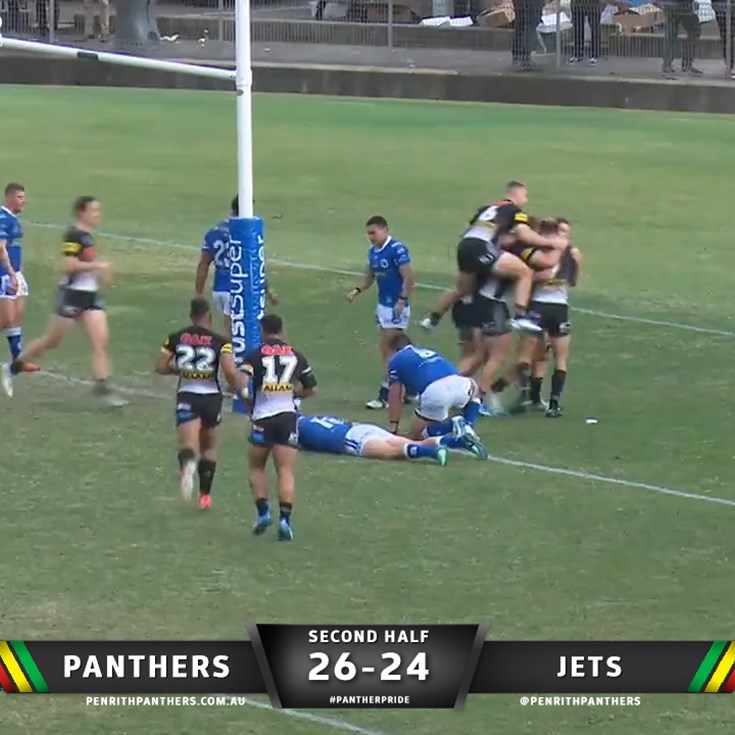