The Panthers pulled off an incredible comeback to beat the makeshift Sea Eagles 31-24 at Brookvale Oval on Sunday.

The visitors went to halftime behind 20-4 after being starved of possession and field position in the opening stanza.

However they roared back into the game in the second half and took the lead with nine minutes left in the contest as Peter Wallace converted his own try.

The Panthers scored 27 unanswered points from the 49th minute to completely overshadow what had been an electric first half from Manly five-eighth Dylan Walker, who shrugged off recent attention over his short Origin cameo to put Penrith to the sword in a magnificent opening 40 minute burst.

Instead rookie playmaker Nathan Cleary and NSW hopeful Bryce Cartwright stole the headlines in half an hour of enterprising and attacking rugby league.

Playing both edges, Cartwright was near unstoppable with his offloads, passes and kicks all on song after struggling to impose himself in a mixed opening 40.

Cleary, who looked unflustered in last week's loss to the Storm without stamping his authority, produced some towering bombs and scythed through for his maiden NRL try to break the hearts of the 12,463 fans who came out to Manly's first Sunday home game of 2016.

Hear from Anthony Griffin and Matt Moylan after the game: http://bit.ly/PressConfRd14

The Sea Eagles are left with just one win at home this year, back in Round 3 against Cronulla, and see their top eight hopes slipping away with a result that leaves them in front of only Newcastle and the Roosters while Penrith move into the eight.

Despite losing prop and co-captain Nate Myles to a knee injury just five minutes into the contest (though he returned late in the game), the Sea Eagles had the type of first half coaches only dream about.

The Panthers gave up a ruck penalty late in the first set of the game and Manly then scored before Penrith even touched the ball when Walker's footwork saw him stand up Isaah Yeo on Penrith's left edge and push past Matt Moylan at the line.

The ninth minute brought a play that arguably summarised the whole first half: an awful pass from Walker was batted back from touch by winger Matt Wright from where Tyrone Peachey should have dashed away, but he lost it attempting to scoop up the ball and Manly's ordinary pass was rewarded with another full set.

Although Penrith ended up being next to score from there through that man Peachey, receiving a nice wide ball from Cleary before stepping back on the angle to score, it was the last Penrith fans had to cheer about in the half as Manly racked up a 69 per cent first half possession rate.

A poor pass from Moylan to Josh Mansour, having just done well to defuse a bomb, handed Manly a free attacking set and Tom Trbojevic smashed through opposite man Waqa Blake to make it 12-0 inside 20 minutes.

Shortly after Moylan did well to trap an attacking grubber but the ball beat his chase to find touch and Manly once again were gifted an unexpected attacking set, but Jake Trbojevic lost possession  in the act of trying to score.

Manly's next successful attacking raid, in the 26th minute, once again came when a poor option yielded a result. A shocking pass from dummy half on the last forced Walker to run back to retrieve the ball and force a hurried chip kick, but lazy efforts from the Panthers allowed winger Matt Wright – one of Manly's few players left onside by the time Walker retreated – to scoop up the ball, evade the defence and pass to a supporting Walker to cross.

The maligned NSW utility slotted his second straight sideline conversion to make it 18-4.

A mountain of possession late in the set seemed certain to lead to another try but Manly took the peculiar option of stretching their lead from 14 to 16 after Penrith conceded a second straight ruck penalty in front of the posts for a 20-4 half-time advantage.

The early signs were bad for the home team right from the start of the second half; at the end of the first set a miscommunication at the back handed Penrith a repeat set in attack, but the Sea Eagles were able to not only hold on but extend their lead through some wonderful work from winger Jorge Taufua.

Receiving the ball after a Tom Trbojevic bat-back to Brett Stewart, Taufua grubbered ahead to himself and grounded it just inside the dead ball line for what looked a near impenetrable 24-4 lead with just over half an hour to play.

It was the try that sparked Penrith – and in particular their new halves pairing – into life.

A deft Cartwright grubber out to the left cashed in on a numbers advantage for Josh Mansour to score in the 49th and barely five minutes later Cleary speared onto a Latu pass to touch down for his first NRL try and at 24-14 with 25 to go the comeback was officially on.

Some desperate defence shortly after denied Tom Trbojevic a try and despite soaking up a couple of line drop outs it was suddenly Penrith with all the running.

At the next attacking opportunity, prop Leilani Latu – who had a whale of a game – smashed onto a Moylan short ball from dummy half to close the gap to four and from the very next set from the restart a Moylan cut-out pass put Peachey into space, from where it was a simple job to draw Stewart and pass to a supporting Wallace and the Panthers were miraculously in the lead, up by two with 10 to play.

You felt they needed more points to seal the deal and Cartwright obliged, producing a brilliant offload to send Blake into space to easily draw Stewart and send Dallin Watene-Zelezniak across put the result almost beyond doubt at 30-24.

When Walker's restart failed to travel the 10, Penrith again started in range and a Moylan field goal sealed the 31-24 win. 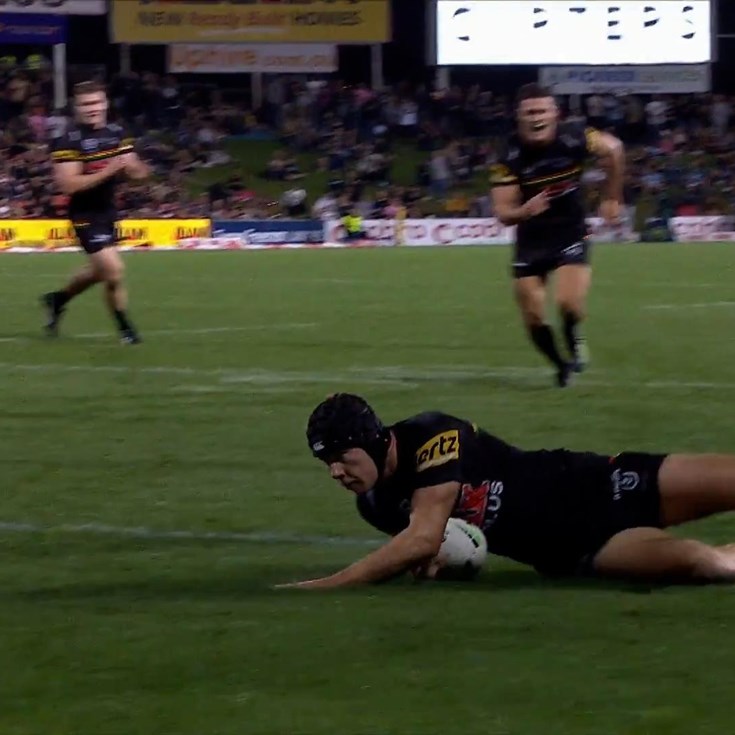