Penrith’s Under 20’s side is still searching for their first win of the year, after going down to Parramatta 26-18 at Pirtek Stadium this afternoon.

We had a shocking start and let the Eels get away with three unanswered tries, before putting a few points on the board ourselves. We did stage a small comeback attempt at one point, giving Panthers fans a bit of hope that we might actually challenge for a win, but it was short-lived and the home side ran away with the game.

One positive out of the match was the performance of winger Josh Jay who scored a hat trick of tries.

Here’s how it all happened.

We were three minutes into the match when Parramatta opened the scoring. Winger Fabian Goodall took a pass right on the sideline and then sidestepped Panthers halfback Sam Scarlett to dive over near the corner post. The conversion by Nathan Davis missed, so the score went to 4-0.

They backed that up 5 minutes later in almost identical fashion, drawing our defenders into the centre of the field before passing wide to Goodall who charged in to score. This time Davis was on target, and the home side extended their lead to 10-0.

The Eels had their third try soon after that, when prop Tepai Tepu-Smith smashed his way through Penrith’s back line and dragged us over the line right beside the posts. The conversion was a piece of cake from in front, so the score went to 16-0, with 15 minutes gone.

But the day was still young and the Panthers weren’t going to give up that easily, and after working our way up to our end we sent a beautiful pass out to Josh Jay on the wing, and sent him over to score! Bryce Cartwright missed the kick so the score went to 16-4, with 20 minutes remaining.

Putting those points on the board seemed to give our boys a bit of a confidence boost, and over the next 10 minutes we found our feet, made good tackles and actually managed got some quality time with the ball, and it paid off with another try.

It came courtesy of some fancy footwork by Brent Naden, who was handed a long ball by halfback Jarrod Brackenhofer over on the left wing, before he palmed off one Eels defender and ran through another to get the ball down over the line. Cartwright was off target again, so the Panthers narrowed the score to 16-8, with 8 minutes until halftime.

The Eels came close to putting another 4 points on the board just before half time, but Penrith’s defence was outstanding and we managed to hold them out until the siren sounded.

The home side opened the scoring in the second half in a virtual replay of the first, drawing our defenders off the sideline before passing out wide to winger Halaufu Lavaka who dived over to score, just before he was taken out by a couple of Panthers players. The conversion missed so the home side took their lead to 20-8.

Despite the shaky start, Penrith lifted their game and for the next 18 minutes we dominated possession and managed to keep the ball up our end. Despite a few fumbles and some tactical mistakes, we were next to score. Josh Jay took a nice ball out on the right side, and sprinted up the sideline to score, beating several Eels defenders. Cartwright missed again, so the score moved to 20-12, with 20 minutes remaining.

Jay almost had his hat trick a few minutes later, again up the right side, but he was tackled as he went over the line and he lost the ball before getting it down.

Both sides played out the next 10 minutes in the middle of the park, with possession going back and forth and plenty of errors being made by both sides. But it was the Eels who came out on top when they got their second wind around the 70 minute mark and started attacking their line in a big way. They eventually broke through with Captain Ryan Matterson barging his way over the line. With a successful conversion, the home side took their lead to 26-12.

With 2 minutes on the clock, and with both sides looking exhausted, Penrith had another crack at their line and sent Josh Jay over in the corner for his hat trick! Cartwright was on target with the conversion and sent it through the uprights to narrow the score line to 26-18, but as the full time siren sounded, the Panthers hopes of getting their first win of the year were dashed again. 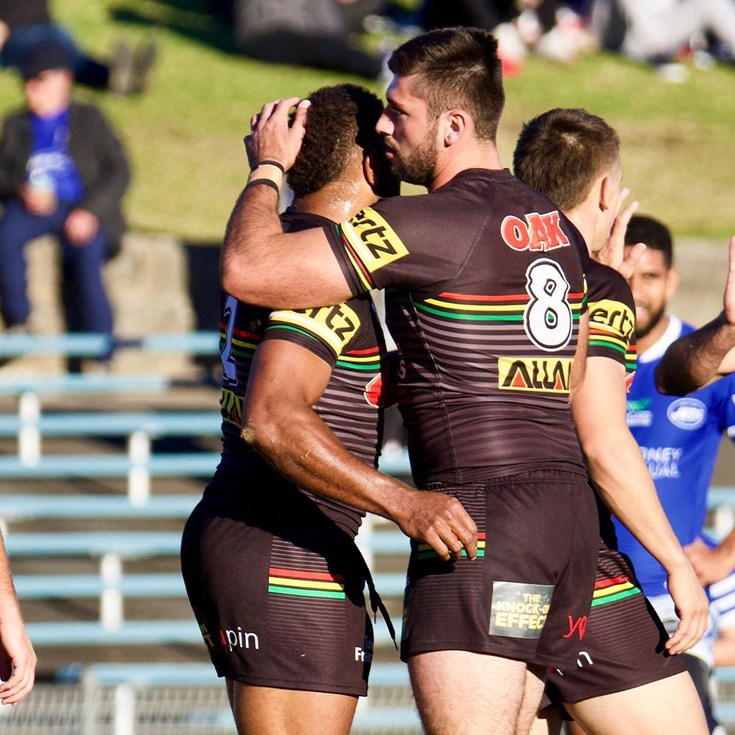